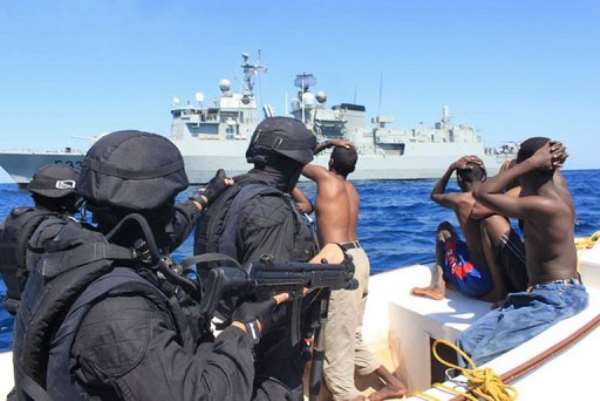 THE HAGUE (AFP) - Nine alleged Somali pirates went on trial in the Dutch port city Rotterdam on Tuesday charged with opening fire on Dutch marines trying to board a captured Iranian fishing boat in 2011.

The men, aged 18 to 38, allegedly opened fire on Dutch marines based on the navy frigate Tromp patrolling the pirate-infested waters of the Gulf of Aden on April 2, 2011. Two Somalis were killed in the ensuing firefight.

The marines then boarded the ship and arrested 16 Somalis and found 16 Iranian fishermen who had been held hostage on the boat for four months as well as automatic weapons and rocket launchers, according to the prosecution.

Seven of the Somalis were released and the rest brought to the Netherlands for trial on charges of piracy and attempted murder.

Court spokeswoman Michele Boonstra told AFP that trial hearings would take place over the next two weeks with a verdict expected after October 8. If convicted, the men could face life in prison.

The first Somali pirates to be tried in Europe were jailed for five years by a Rotterdam court in 2010 after they attacked a Turkish cargo ship in the Gulf of Aden. The Netherlands has universal jurisdiction for alleged piracy crimes.

The deployment of warships off the Somali coast, from NATO's Operation Ocean Shield, the European Union Naval Force Somalia (Operation Atalanta) and Combined Task Force 151, has led to a drop off in pirate attacks this year.

After a spike at the start of the last decade, successful pirate attacks on commercial vessels sailing off the Horn of Africa have diminished.

Twenty-eight attacks were recorded in the first half of 2011, three in the second half and five since January, according to recent Atalanta figures.