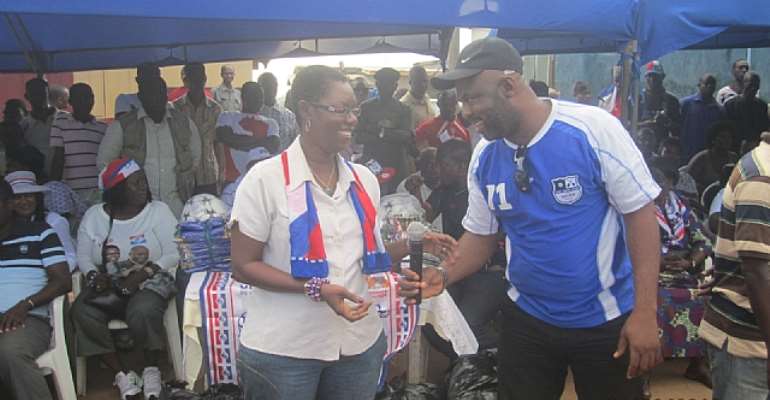 The 'Jesus Is Alive' park in Dansoman was the venue for a thrilling football gala competition organised yesterday by Ursula Owusu for the Muslim youth in Nasarawa and Tunga communities. The NPP parliamentary candidate for the Ablekuma South constituency who has become the darling of the Muslim youth in the constituency was elated to be with the Muslim youth once more. Having engaged the Muslim women on many occasions on how to solve the problems women faced in our society, she obviously felt it was time she gave the young men their due. The occasion drew football teams, which usually engaged themselves in keep fit sessions on Sundays for a fierce football competition. As someone who had lived in Saudi Arabia some years back, it was not surprising Ursula Owusu had built a very cordial relationship with the Muslim community in Dansoman and other communities in the constituency.

It was however surprising how many of the Muslim youth expressed grave regrets for supporting the current member of parliament for the constituency whom they had never set eyes on ever since he was elected into Parliament. Reacting to concerns raised by the youth in her address after the gala, she emphasized her commitment to veer off the 'lip service' most politicians paid the electorate after being handed the mandate of the people. She reiterated the promise by Nana Akufo-Addo and the NPP to make SHS free and charged the youth to support the vision of the NPP flag bearer since education was surest way for us to transform our lives and that of our communities.

The programme attracted some National Executives and stalwarts of the Party. The National Nasara Co-ordinator of the Party, Mr. Bamba popularly known as 'lakulaku' who was at the event also introduced the youth to some of the slogans designed by the Nasara club for the 2012 election. Increasingly, the Ghanaian electorate is buying into the vision of making education a right and not a privilege.