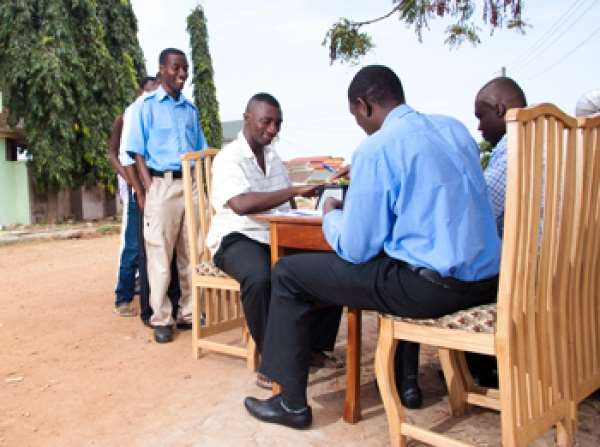 Accra, Sep 2, GNA – Various reasons were at the weekend attributed to the low turnout of the 10-day Exhibition of the Biometric Voter Register exercise which started yesterday, with poor publicity dominating the cause.

At the Presbyterian Primary and JHS (PP&J) I and II at Chorkor, a suburb of Accra, Madam Charlotte Bruce, Exhibition Officer at the centre said some residents told her they did not see the significance of the exercise, and that they would rather patronize it on the Election Day.

She was speaking to the Ghana News Agency (GNA) in Accra when it visited some exhibition centers to ascertain the level of patronage of the national exercise.

Madam Bruce said some residents preferred the exhibition to be held on or close to Election Day saying, “Some of the residents in Chorkor told me that they will not come out from their houses to check whether their names are on the register since they were not going to vote.”

As at mid-day, only two persons had checked their names at the Centre II of the PP&J centre, with only one person having patronized the exercise yesterday.

Centre I has 974 total registered eligible voters and out of the number, only 29 had already checked their names as of yesterday. The centre recorded 17 people checking their names by mid-day today.

Madam Bruce called for increased publicity of the nationwide exercise for high patronage.

The situation was far from different in other centres, with Urantia Book Fellowship (UBF) Centre at Agege, St Dominic Preparatory School at Ayalolo and Mamprobi Sempe (MS) 12 and 13, all suburbs of Accra, recording similar low figures.

Madam Rejoice Mensah, Exhibition Officer at Agege, a suburb of Accra, called for more publicity on the exercise to make it successful.

When the GNA visited the UBF centre at 11:55 hours, 83out of the 614 total entries in the register had checked their names for the two days.

Madam Regina Essilfie, an Exhibition Official at the MS exhibition centre shared the same sentiments with the others as she blamed poor publicity for the low patronage of the exercise.

Madam Essilfie said she had recorded only three cases of error and added that the anomaly had to do with the sex and age of the individuals.

She called on the authorities to step up the publicity on the exercise.

Nii Okine Tagoe, who had gone to check his name at the MS centre, however disagrees with the reasons attributed to the low turnout.

He said the publicity and other communication activities for the exercise was enough, since there were more posters and television and radio advertisements on the voter exhibition.

According to Nii Tagoe, Ghanaians must adopt what he described as a “nationalistic attitude” towards such important national exercises.

He said some Ghanaians had just decided not to be interested in the exercise as well as on national affairs, stressing that such attitudes does not help in development.

Nii Tagoe however admitted that the use of information vans in areas where residents' appreciation and comprehension for national issues were low could help advance the cause.

Meanwhile many places visited in Accra on day two of the national exercise shows that some centres had been quite with security and political party agents absent while some of the officers were seen taking a nap.