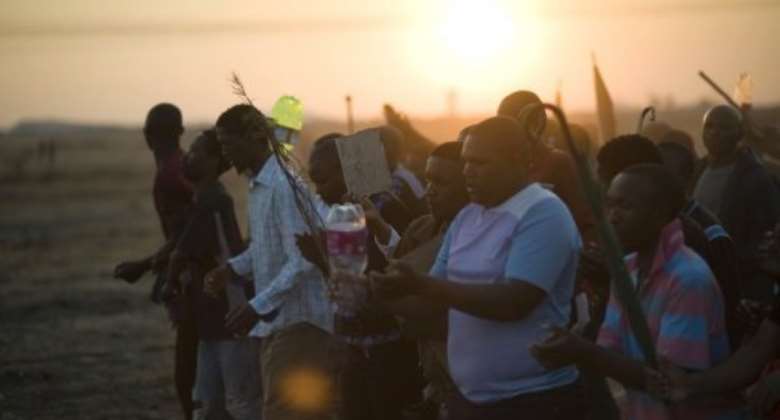 Miners at the Lonmin platinum mine in Marikana, where 34 died in an altercation with police. By Rodger Bosch (AFP/File)

PRETORIA (AFP) - A South African court on Monday released 47 of 270 mineworkers who had been held since 34 of their colleagues were gunned down by police at an illegal strike last month.

"The murder charges against the accused are at this point of time withdrawn," said Magistrate Esau Bodigelo as he released 47 miners in the court north of Pretoria. "You may stand down," he added as applause broke out in the courtroom.

The prosecutions chief announced on Sunday that the murder charges would be provisionally withdrawn after sparking outrage when they were laid down Thursday for the August 16 killing in which police gunned down dozens of strikers at the Lonmin platinum mine.

The releases are being processed in batches with no bail required but the group will return to court on 12 February 2013 on charges of public violence and for holding an illegal gathering.

"The charges will be withdrawn from the 270 accused but only... about 160 will appear in court today," he said.

Addresses of the arrested miners had to be verified by police as a condition for their release.

The bloodshed shocked the world, raising parallels to brutality under the white apartheid regime, and has been described as the worst police crackdown since democracy in 1994.

What again do you have for Ghanaians besides economic theori...
17 minutes ago

Your plan to buy oil with gold instead of USD bogus; you're ...
55 minutes ago