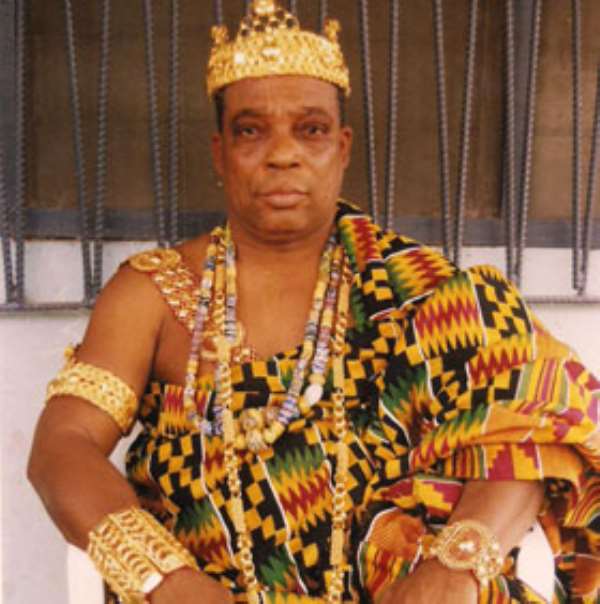 THE HIABA royal family of Awudome-Anyirawase (kingmakers) and the Awudome Traditional Council have emphasized that Togbe Addae Kwasi Sekpe XII is still the paramount chief of the area.

The two bodies made this known in separate rejoinders to DAILY GUIDE in reaction to allegations that the chief had been destooled long ago. According to the Hiaba family who claim to be the kingmakers, Togbe Sekpe 'has not and has never been destooled.'

The Awudome Traditional Council in their reaction noted that the claim by leaders of the seven divisions of the paramountcy was an ignorant, wrongful and deceitful pronouncement.

On Wednesday July 25, six chiefs and a queen mother representing the seven divisions of Awudome, announced at a press conference at Awudome-Avenui that Togbe Addae Kwasi Sekpe was destooled in 2005.

At the said press conference, they said the kingmaker, Togbe Adza Gbeklui Akordake XI of Avenui was the one who performed the destoolment rituals.

The chiefs in their statement notified the various houses of chiefs particularly that of the region and all other organizations and authorities to henceforth ignore the position Togbe Sekpe XII (known in private life as John Gley) claims to hold on behalf of Awudome. They added that any transaction, meeting and activity which the chief engaged in on behalf of Awudome was 'illegal'

However the kingmakers of Awudome noted that they are the only people who can enstool and destool a paramount chief of Awudome.

'He has not been destooled by us the kingmakers and we have no intention to destool him unless he goes against tradition, custom and the norms of the stool,' they added

They explained that Togbe Sekpe was enstooled as Mankrado in 1977 and gazetted; making him a paramount chief in waiting according to their custom. He also satisfied requirements of the Chieftaincy Act 370 of 1971, Act 759 of 2008 and the 1992 constitution section 277 and 57(1) which gives the definition of a chief.

More so they said, he had been a member of the Awudome Traditional council until 2004 when he was made president of the council. The kingmakers alleged that the chiefs who held the earlier press conference took 'advantage of the ailment of Togbe Adzo Gbeklui Akordake XI and Mama Adomwa I to disturb the peace in Awudome should know that destoolment matters are serious matters…'

The Traditional Council which is headed by Togbe Addae Kwasi Sekpe XII in their rejoinder supported the claims of the Kingmakers. It added that Togbe Adza Gbeklui Akordake who is claimed to be the kingmaker by the seven chiefs is erroneous.

According to the council, Togbe Akordake pays allegiance directly to the paramount stool and hence has no authority be it customary or legal to instigate other chiefs against the paramount chief. The chiefs who joined him in that action are also ignorant about custom and are not qualified members of the Traditional Council as required by the laws of the land although customarily enstooled, it said.