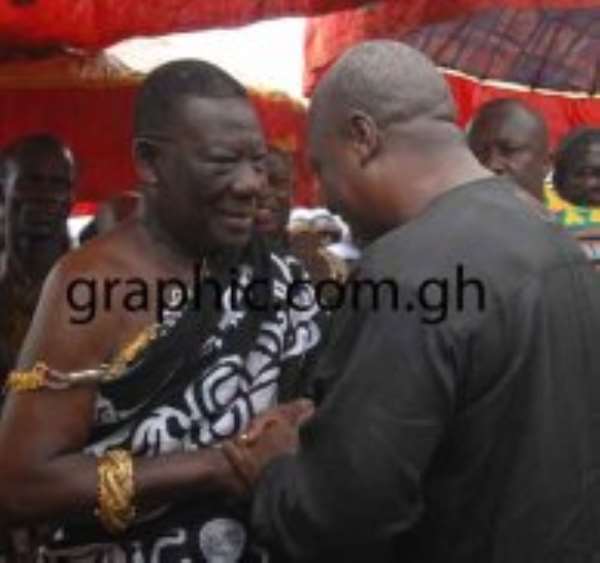 President John Dramani Mahama has appealed to chiefs to lead the crusade against the raging insults on media platforms such as the radio, since they are inconsistent with Ghanaian culture and tradition.

He expressed worry about the situation where young people could make indecorous remarks about personalities such as the President, ministers of state, Members of Parliament, chiefs and other people in authority on radio every morning without rebuke from some traditional rulers.

Therefore, he said, once chiefs were the custodians of the country’s tradition and culture, they needed to wage a crusade against the insults by speaking against the worrying trend at every forum.

President Mahama made the call Wednesday at a durbar of chiefs and people of the Ashanti Region at the Manhyia Palace Park in Kumasi.

The durbar was held in honour of the President who was in the region to thank the chiefs and people of the Ashanti Region for their support during the funeral of President J.E. A. Mills.

The chiefs, dressed in their traditional kente cloths with gold ornaments, sat in state.. Drumming and dancing added colour to the event, which was attended by other government officials, including the Minister of Finance, Dr Kwabena Duffour, the Minister of Roads and Transport, Mr Joe Gidisu, the Minister of Energy, Dr Oteng Adjei and the Minister of Tourism, Ms Akua Sena Dansua.

Earlier, the President was accorded a warm reception by a large crowd of NDC supporters and sympathisers on his arrival at the Kumasi Airport. The supporterss, some of whom were in cars and on motorbikes, led the President’s convoy in a procession to the Manhyia Palace.

He first called on the Queen, Nana Afia Kobi Serwaah Ampem, at the Manhyia Palace before moving to the durbar ground. That was because the Asantehene, Otumfuo Osei Tutu II, had travelled outside the country.

President Mahama said the call for the cessation of insults on radio was not an attempt to gag people from criticising leaders or their policies.

Rather, he said, it was a move to encourage people to criticise leaders in a more civil, decent and refined manner without the use of insulting language.

On the forthcoming election, President Mahama said the political mantra of “all die be die” would not work during the election because there would not be any chance for any group of people to create confusion or undermine the peace in the country.

He said the government would work with the security agencies to ensure that all qualified voters cast their votes without fear or intimidation.

“There will not be any ‘all die be die’ during the election. It will not happen that we will take sticks or matchetes to hit one another. This year’s election will be the most peaceful and successful election ever held in Ghana,” he said.

President Mahama said his commitment to ensure peaceful election was in fulfillment of the promise made to Ghanaians by the late President Mills.

He said Ghanaians were one people, and indicated that members of different political parties were not enemies but that they all had the same objective of developing the country with different strategies.

The President pledged to continue with all the projects started by the late President Mills in the Ashanti Region, and promised to initiate new projects in the region.

He said the Ashanti Region, which produced cocoa , gold and other food produce and minerals, would be given its fair share of the national cake.

President Mahama thanked the Asantehene and all the chiefs and people of the Ashanti Region for supporting the government to give a fitting burial to the late President.

He, thanked the Asantehene, particularly, for the message of encouragement he sent to him through the delegation he sent to the Castle, and indicated that the Asantehene’s message encouraged him to organise a fitting funeral for President Mills.

The Mamponghene, Daasebre Osei Bonsu II, who represented the Asantehene, said the demise of President Mills was a big blow to the whole nation.

He, therefore, lauded President Mahama for leading the government team to give the late President Mills a fitting burial.

He again commended the President for following tradition by walking to the chiefs and people of the Ashanti Region to show appreciation for their support during the funeral of the late President Mills.

Daasebre Osei Bonsu II urged President Mahama to be bold to avert any conflict that might arise during the election.

He stressed that if there was no peace in Ghana there could not be peace in Asanteman.

Daasebre Osei Bonsu II assured President Mahama of the support of the chiefs and people of the Ashanti Region for him to continue to run the affairs of the country for the good of all Ghanaians.