Gambia on edge amid executions of death row convicts 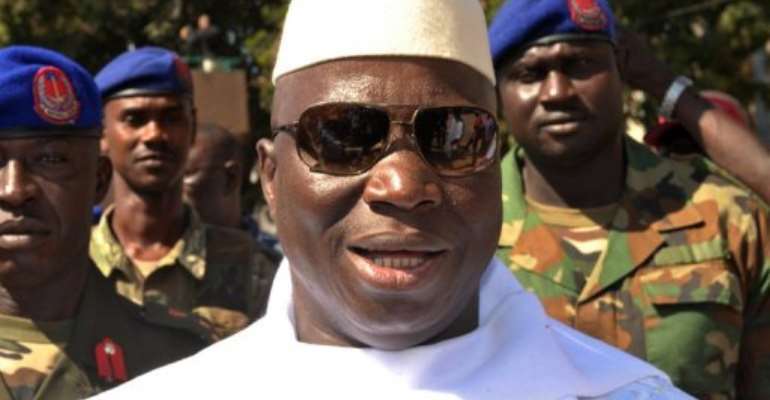 The 47-year-old former soldier, who seized power in a 1994 coup, dismissed concerns expressed by the African Union and rights bodies that had urged him not to carry out his plans. He executed a first batch of prisoners on Sunday night.

On Tuesday amid a chorus of calls to halt further killings, Amnesty International said many of the 38 people "at imminent risk of execution" had faced politically motivated charges and had not been given a fair trial.

"Amnesty International remains concerned that many inmates have been convicted after unfair trials where they have not had access to lawyers or an appeals process," said Paule Rigaud, Amnesty's deputy director for Africa.

"Some were sentenced after being tried on politically motivated charges and have been subjected to torture and other ill-treatment to force confessions."

He said in a statement that conditions on death row had reportedly become even worse in the past week with family members unable to contact those inside.

Gambia's interior ministry announced Monday that nine death row prisoners had been executed by firing squad the night before, a week after Jammeh vowed to carry out all death sentences by mid-September.

"We are absolutely dumbfounded by this news," said Alioune Tine of the Dakar-based African Assembly for the Defense of Human Rights.

"It is a case of madness at the head of a country, a paranoiac at the head of Gambia and that is dangerous for Africa," Tine said, calling for the "total isolation" of the Gambian leader.

One man and a woman who were executed were Senegalese citizens, and Senegal's President Macky Sall said he "deeply regrets" the killings.

"Macky Sall calls on Gambia to urgently suspend all executions," read the statement from his spokesman.

Another Senegalese citizen is still on death row in Gambia, which is surrounded by Senegal except for a strip of Atlantic coast.

Commonwealth spokesman Richard Uku said in a statement the executions were "a matter of grave concern" and urged the government of the former British colony, a member of the 54-state Commonwealth, to renounce its plans.

The European Union has also demanded "an immediate halt" to the executions as did the US.

"The United States calls on President Jammeh to immediately halt all executions in order to review all of the Gambia's capital cases," State Department spokeswoman Victoria Nuland said in a statement.

"The United States is greatly concerned by the government of the Gambia's execution of nine death row inmates," Nuland said.

"We condemn the lack of transparency and haste under which these executions were effected and the apparent lack of due process in the proceedings leading to these death sentences," she said.

The opposition Party for Democracy and Progress in Gambia denounced the executions as a "senseless" act Tuesday and called on Jammeh to step down.

Jammeh, who has woven an aura of mysticism around himself, dressing in billowing white robes and always clutching his Koran, is accused of ruling the tiniest nation on the African mainland with an iron fist.

The president's feared plain-clothes security officers could be seen on the streets of Banjul on Tuesday, and tension was palpable among citizens who were afraid to talk about the executions.

In a televised address to mark Muslim feast of Eid al-Fitr this month, Jammeh said: "By the middle of next month, all the death sentences will have been carried out to the letter."

The regime of the man who says he can cure AIDS is often pilloried for human rights abuses, extra-judicial killings, torture and muzzling journalists.

Many top officials have found themselves charged with treason, often related to coup plots which observers have said are a sign of paranoia by Jammeh, who won a fourth term in office in November 2011.

Last year eight military top brass, including the former army and intelligence chiefs and the ex-deputy head of the police force, were sentenced to death for treason.

Prior to Sunday, the last official execution in Gambia was in 1985 and Amnesty International had considered Gambia to be among the 22 of Africa's 54 states that had in practice abolished capital punishment.

Bishop Dag apologises to Otumfuo over 'offensive' sermon
33 minutes ago

There's power in a father's encouragement – Pastor Otabil
33 minutes ago