The falls and hues of Jiuzhaigou 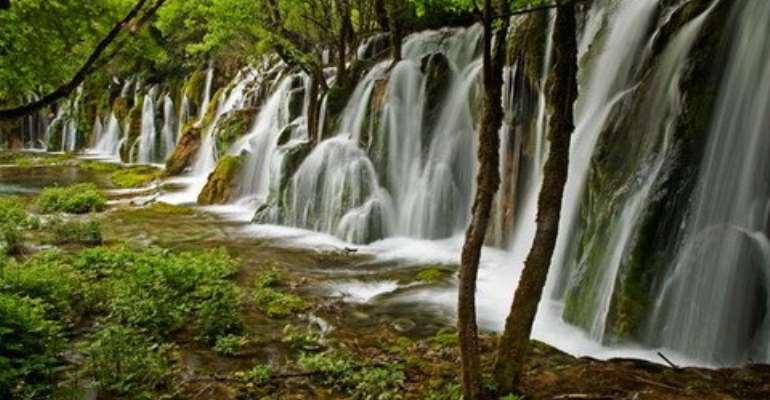 High in the mountains of China's Sichuan province, the Jiuzhaigou National Park is a lush greenbelt renowned for its emerald- and sapphire-tinted waters.

Cascades
High in the Min Mountains of China's Sichuan province rare plants and animals find sanctuary in the Jiuzhaigou National Park, a green reserve bumped up against the Tibetan Plateau. With an elevation ranging from 2,000m to 4,500m, Jiuzhaigou is far removed from the sooty industrial sprawl that consumes the lands below; its tiered waterfalls and clear chromatic lakes are a breath of fresh air in a country operating 65% of the world's construction cranes. Bamboo Falls (pictured) – a mere 7m high but spanning nearly 152m – cascades down the Rize Valley, often the first stop on a visit to the park. (Michael S. Yamashita/National Geographic Stock).

Hues and reflections
Jiuzhaigou, formed in large part by glacial avalanching, covers an area of 720sqkm and is made up of three valleys arranged in a “Y” shape. Each valley is composed of lakes and waterfalls with names like Tiger Lake, Double Dragon Lake, Arrow Bamboo Falls and Pearl Shoals Falls. The sapphire- and emerald-tinted waters of the park are the result of dissolved limestone, and high concentrations of calcium carbonate are responsible for the lakes' crystal clarity. (Michael S. Yamashita/National Geographic Stock).

Photo ops
On peak days thousands of eager visitors strain Jiuzhaigou's limits. About 80 hotels are clustered at the base of the “Y” and nearly 65km of wooden walkways, stairs and observation decks connect tour bus routes to prime attractions within the park. Jiuzhaigou's Nuorilang Falls, cascading 24m down in the clear mountain light, is a popular backdrop for bridal photography. (Michael S. Yamashita/National Geographic Stock).

Myths and legends
For centuries, the remote region of the park was inhibited by various Tibetan and Qiang (a Chinese ethnic group) societies. Buddhist mysticism along with Bon – a religion Tibetans practiced before Buddhism was introduced in the 7th Century – animated these lakes and rivers with spirits. Legend holds that a goddess dropped her mirror into one of the lakes, a dragon sleeps at the bottom of another and Upper Seasons Lake is a mythic hiding place of fire-breathing monsters. (Michael S. Yamashita/National Geographic Stock).

Clear depths
Calcium carbonate deposits on the bottom of the lakes assume fanciful shapes, like those at the bottom of Sleeping Dragon Lake. (Michael S. Yamashita/National Geographic Stock)

Roaming wildlife
The Upper Seasons Lake serves as a watering hole for the yaks tended by the Tibetan villagers who live inside the Jiuzhaigou borders. Among the park's other wildlife species are golden snub-nosed monkeys, hog badgers, musk deer, lynx, civets, the littler red species of panda and rhesus macaques. Black-and-white pandas – trumpeted by the government as the “national treasure” of China – once called Jiuzhaigou home, but years of heedless logging and the die-off of bamboo before the park's designation in 1997 decimated the panda population. (Michael S. Yamashita/National Geographic Stock)