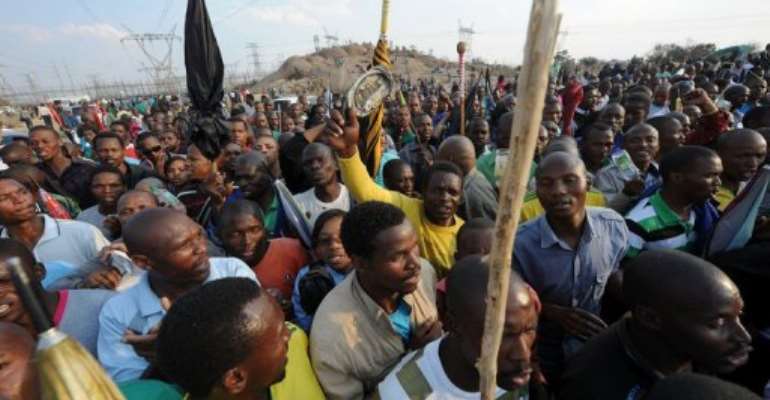 People gather in Marikana on August 23 after attending a memorial service for the 44 individuals killed. By (AFP/File)

JOHANNESBURG (AFP) - After a promising weekend turnout of workers at its South African platinum mines, Lonmin voiced hopes more will clock in on Monday as talks resume following violence that claimed 44 lives.

Lonmin expects the bulk of its 28,000 workers to report for duty while it tries to work out a deal with the 3,000 rock drill operators who launched a wildcat strike more than two weeks ago.

Lonmin said 57 percent of workers had reported for duty on Saturday at one of its two sets of shafts.

"We are quite upbeat. We are hopeful we will get more workers tomorrow," said spokeswoman Sue Vey.

The government and religious leaders have been mediating in talks between unions and Lonmin management.

Mining operations at the world's third largest platinum producer have ground to a halt since August 10 when the 3,000 rock drill operators started a vigil on a hill, demanding a 300-percent pay rise.

The strike degenerated into violent clashes between workers, leading to the deaths of 10 people, including two policemen.

An official mourning period for those killed declared by President Jacob Zuma drew to an end at the weekend.

Production at the mines has not yet resumed, with Lonmin saying mining operations would restart once it has secured "sufficient numbers" of workers and safety has been ensured.

"No production is happening. Yesterday's shift was all about making the place safe, cleaning and briefings," she told AFP.

The company will likely battle to meet its annual production target of 750,000 ounces.