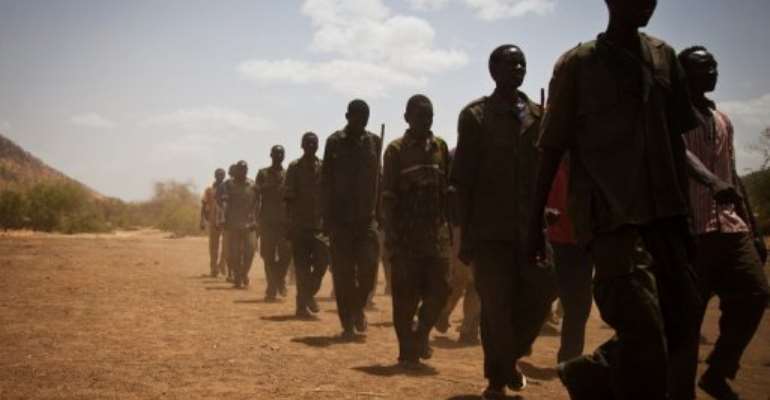 KHARTOUM, Sudan (AFP) - Rebels in Sudan's South Kordofan state on Friday accused the government of attacking villages to stymie an international aid plan for the area where hundreds of thousands of people have been affected by fighting.

A senior ruling party official called the accusation false, saying the government is committed to allowing relief into the war zone, under an agreement with the African Union, Arab League and United Nations.

That fighting followed attacks by government soldiers and militia against two other Rashad-area villages on Wednesday and Thursday, the rebels claimed in a statement.

It said 18 government troops and one rebel died during those two earlier incidents.

Sudan's army spokesman could not be reached for comment.

Access to the area is restricted, making verification of casualty claims difficult.

"This confirms what we announced before, that the agreement from NCP about delivering aid is just a tactic," Lodi said in the statement, referring to Sudan's ruling National Congress Party.

The government in early August signed a memorandum of understanding with the AU, Arab League and UN to allow for humanitarian access throughout South Kordofan and Blue Nile -- including in rebel-held areas.

The UN has expressed concern for months about a worsening humanitarian situation in the war zone, where Khartoum cited security concerns in tightly restricting the operations of foreign aid agencies.

Officials said the aid agreement calls for ceasefire zones that would allow the relief to flow.

A similar memorandum has been reached with the rebels but no start date has been announced for the aid operation.

"We are committed... that aid will be provided to all areas," senior NCP official Rabbie Abdelatti Ebaid told AFP. He also expressed commitment to the ceasefire.

Ebaid said the rebels are the ones "creating the disturbance".

Sudan accuses South Sudan of supporting SPLM-N, a charge which analysts believe despite denials by the government in Juba.

The number of people affected by the fighting has more than doubled since December, according to UN figures, and now stands at more than 650,000.

In April some refugees reaching South Sudan reported that they had to forage in the wild to survive.

Ethnic minority insurgents of the SPLM-N fought alongside southern rebels during Sudan's 22-year civil war, which ended in a 2005 peace deal and South Sudan's independence in July last year.