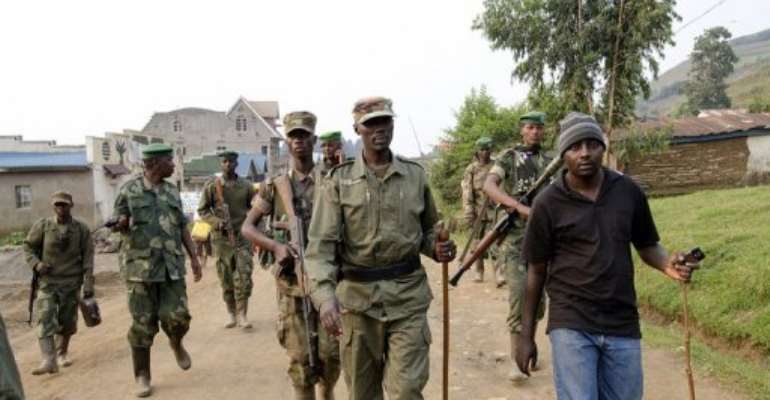 M23 is formed of men who started deserting from the army in April. By Michele Sibiloni (AFP)

KINSHASA (AFP) - The M23 rebel movement which is fighting the regular army in the east of the Democratic Republic of Congo accused the army Friday of forcibly recruiting civilians, notably children.

"They are taking everyone, people working in the fields, children and even the elderly," Kazamara charged. "The law bans the recruitment of child soldiers."

According to the M23 leader, "thousands of people" are fleeing the recruitment campaign, which will also affect the new school year due to start early next month.

The armed forces (FARDC) two weeks ago launched a recruitment campaign to help in the fight against insurgency in the troubled eastern Kivu provinces of the country. Western sources say that the FARDC wants to add 25,000 men to its ranks from the current strength of about 105,000 soldiers.

M23, which is formed of men who started deserting from the army in April, complaining about conditions and the failure of Kinshasa to keep to the terms of a 2009 peace pact, has also been accused of recruiting child soldiers, a charge the rebels deny.

In early August, the UN mission in the DR Congo, MONUSCO, expressed "deep concern" at the "forcible recruitment" of civilians in the east of the country.

In a statement issued in Kinshasa, MONUSCO said that "more than 100 cases of forcible recruitment by M23 -- mostly among people aged 24 or younger, including 26 children -- have been documented since the month of April 2012."

Kazarama denied this accusation, but said that in M23, "the doors are open to everybody." His movement, which he says has been accused of being a force of Tutsis, the ethnic group in power in neighbouring Rwanda, will "welcome all those who wish to join it."

The United Nations has accused high-ranking Rwandan officials of providing military support to M23, which has been strongly denied by the Kigali government.