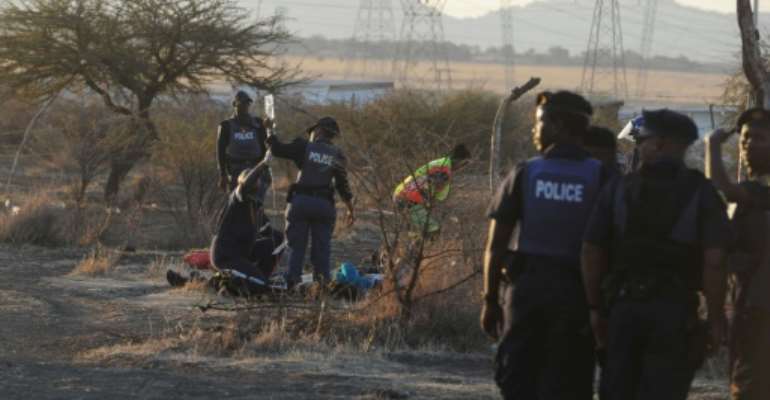 Police medics tend to a wounded miner injured during clashes between protesting miners and police near a platinum mine in Marikana, South Africa, on August 16, 2012. By (AFP/File)

Johannesburg (AFP) - The families of more than 30 striking South African mineworkers killed by police in 2012 have lodged compensation claims against the government, their representatives said Wednesday.

The miners were gunned down on August 16 three years ago after the police were deployed to break up a wildcat strike that had turned violent at the Marikana platinum mine owned by Lonmin northwest of Johannesburg.

Ten others were killed in the days preceding the incident, including two police officers and four non-striking workers.

"The families have filed for compensation for the loss of financial support, grief and emotional shock," Naadira Munshi, researcher with the Socio-Economic Rights Institute of South Africa (SERI) which is one of the groups representing the families, told AFP.

They filed the papers at the High Court in Pretoria on Tuesday.

It was not immediately clear how much the families were seeking in compensation, but a total of 326 dependents have been listed as affected by the violence.

An official inquiry established by President Jacob Zuma released its findings into the massacre in June, putting much of the blame on the police's defective dispersal strategy.

But the report failed to recommend any compensation.

The police "are responsible for causing these deaths," said SERI's attorney Kathleen Hardy.

"We hope the minister will see the need for urgent compensation for the killing of the men."

The families are also seeking a formal apology from the police minister.

"An apology will bring much needed closure to the families who feel they have been abandoned by the South African government," the legal representatives said in a statement.

Police Minister Nathi Nhleko said in a written response that he had not yet been served with the court papers but acknowledged that the families' action would help "bring closure to this sad chapter in the history of our country".

"We need further engagements to bring about closure to the hurt, humiliation and sorrow of our people over this matter," Nhleko said.

The minister has 28 days to respond to the suit.