Sierra Leone chimps back in swing of it as Ebola retreats 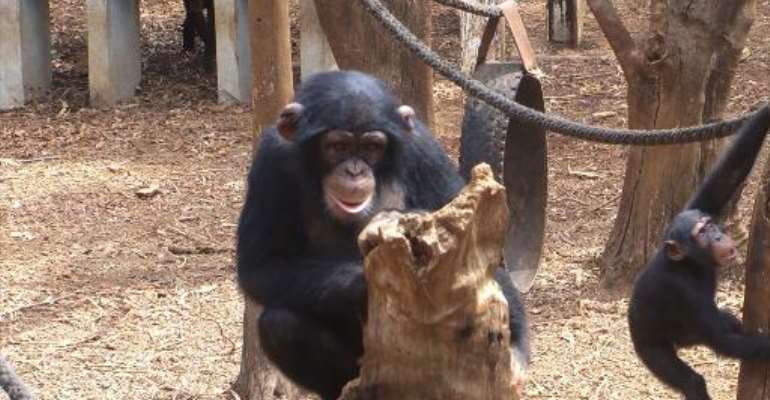 Chimps play at the on Tacugama Sanctuary in Sierra Leone. By (AFPTV)

Freetown (AFP) - In the rising afternoon humidity 30-year-old Tom sits in the shade, picking fleas off his neighbour, unaware of how close he came to losing his home to Ebola.

Tom is a chimpanzee -- one of around 5,000 in Sierra Leone for whom the tropical fever poses as deadly a threat as it does to humans.

His rainforest sanctuary in the verdant hills around the capital Freetown suddenly found itself forced to close in August last year as the virus overwhelmed the human population, killing thousands.

With money running out and only a skeleton staff looking after Tacugama Chimpanzee Sanctuary, Tom and around 85 companions were facing homelessness as the closure began to look permanent.

"We were all worried about what our lives would be like if the sanctuary was not opened again," staff member Abdul Koroma told AFP, adding that he and his fellow workers saw the park as "a baby we have nurtured".

And then one day in January, everything changed.

Weekly infections began dropping back down to double figures, and eventually single figures, and Sierra Leone was able to end curfews, lift travel restrictions, reopen borders and welcome back tourists.

"We have had many enquiries from local and overseas wildlife lovers asking when we would reopen and, taking into consideration the falling number of Ebola cases in recent weeks, we have decided to open up," programme director Bala Amarasekaran told AFP.

The 100-acre (40-hectare) centre was set up in 1995 to rescue chimpanzees whose families had been stolen for the pet trade or wiped out by bushmeat hunters, habitat destruction and the civil war that raged until 2001.

"After the outbreak, we decided not to accept any new chimps due to the potential risk of bringing the disease into the sanctuary, which would have been catastrophic for the chimps," said Amarasekaran, a Sri Lankan.

The Jane Goodall Institute estimates that around a third of the worldwide population of chimpanzees has been killed by Ebola since it first emerged in the 1970s.

The sanctuary -- which was losing almost a third of its income -- was finally able to open on Thursday last week, and Tom was among the residents welcoming the public back.

"He had been kept as a pet since a baby and had not interacted with other chimps since birth," said Amarasekaran.

"He was gradually rehabilitated in 2014, fed with natural food and familiarised with the surroundings and sounds of other chimps. Now he is just like the man next door."

The Ebola outbreak is just the latest tumultuous chapter in the reserve's 20-year history of heroism, heartbreak and villainy.

Among a colourful cast of characters to have stayed at Tacugama, undoubtedly the most infamous is Bruno, described on the website as "charismatic, spectacularly imposing and physically the strongest chimpanzee we have ever had".

Amarasekaran bought the alpha male for $20 in 1988, when he was a just a few months old, and named him after British heavyweight boxer Frank Bruno.

The centre was plunged into controversy in 2006 when Bruno and a pack of 31 chimps escaped, attacking a group of US tourists and killing their Sierra Leonean driver, according to witnesses.

Most of the chimps returned of their own accord, but Bruno -- who was said to have personally killed the driver -- was never seen again.

"Bruno was never traced and we can't say whether he is alive or dead," Amarasekaran told AFP.

The reserve also housed Pinkie, thought to be the world's only albino chimpanzee, whose lifeless body was found in her enclosure in 2002, although no cause of death has ever been established.

Unrelated to Pinkie's case, the reserve has also been struggling for a number of years with the mysterious sudden deaths of a number of chimpanzees.

Staff believe a toxic plant endemic to the region, identified with the help of scientists from the Royal Botanic Gardens in London, may be the culprit but have not ruled out other possibilities.

One positive outcome of the Ebola crisis, as far as the sanctuary is concerned, is that it has curbed the traditional practice of killing chimpanzees for bushmeat.

But habitat destruction is a larger threat to the wild population, with forest cover barely five percent of what it was 100 years ago.

The story of Sierra Leone's chimpanzees may yet get a happy ending, as conservation efforts helped the population to double to around 5,500 between 1980 and 2010, according to the country's first chimp census.

"We are delighted that we have bounced back, as it was difficult to take the decision to shut down. It was like cutting a life line and it was not easy," Amarasekaran said.

"As we prepare to celebrate our 20th anniversary in September, protecting wild chimpanzees and their habitats through sustainable development remains the key to our future and this is the legacy we aim for."