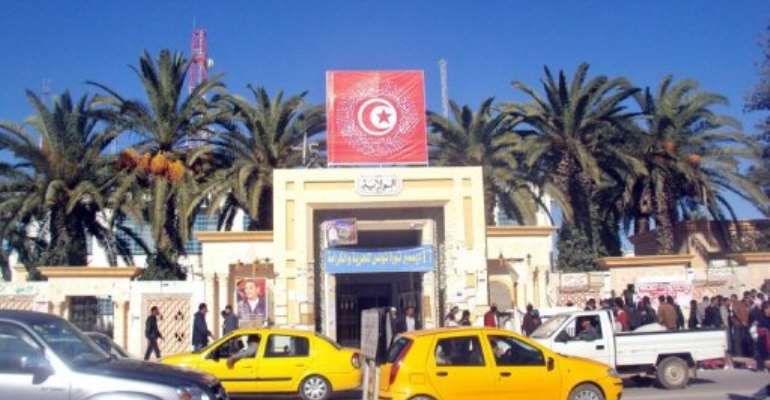 The entrance of the Sidi Bouzid prefecture is pictured in 2011. By Moktar Kahouli (AFP/File)

Witnesses told AFP the assailants came by cars and the police did not intervene to stop the clashes.

One of the victims, a man wounded in the leg and the head with a knife, told AFP that hundreds of radical Islamist militants came by car at night and attacked around 15 houses in the Aouled Belhedi district of Sidi Bouzid.

Residents clashed with the intruders and the fighting continued until dawn, the witness said, adding that police did not intervene.

A source in the city police, who declined to be identified, confirmed the report and said that a "large number" of Salafists had stormed the Aouled Belhedi district.

The police did not intervene "to avoid aggravating the situation," the police source said.

The interior ministry was not immediately available for comment.

According to residents of the city, the confrontations erupted Monday night when a group of Salafists allegedly attempted to seize a drunken man to punish him for drinking alcohol in violation of Muslim laws.

The region of Sidi Bouzid, the birthplace of the revolution of 2011, is a stronghold of the Salafist movement, which according to experts, has tens of thousands of activists across Tunisia.

On August 16 hardline Islamists armed with swords and sticks attacked a cultural festival in northern Tunisia, with five people wounded in the clash, witnesses and officials said.

It was the third time in just three days that Salafists had disrupted cultural events, condemning some of them for violating Muslim sensitivities during the holy month of Ramadan and fuelling fears of a rising Islamist tide.

Opposition and civil society groups have repeatedly criticised Ennahda, the moderate Islamist party that heads Tunisia's ruling coalition, for failing to do more to rein in the hardliners.