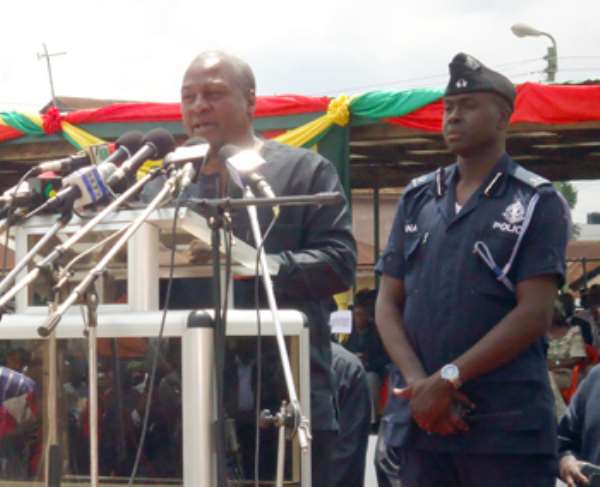 President John Dramani Mahama yesterday blasted his critics for questioning the intentions of his 'Thank You Tour' of the nation, saying it is un-Ghanaian to tag his tour as an electioneering campaign.

'I am here to say thank you to the people of the Eastern Region for coming together to mourn our departed president. Some people have questioned my tour of the nation to thank Ghanaians for the massive support they gave during the death and burial of our late president.

I want to say that this is contrary to our culture because if somebody does something appreciable and you want to show your respect and appreciation, you go to the person and say 'thank you' and not just use the radio or the TV to do that,' the president said at the Koforidua Jackson Park where the people of Eastern Region had gathered to receive him on his 'Thank You Tour' to the region yesterday.

He said if others would prefer to use radio or mobile phones to send text messages of appreciation to people who had been of help to them, then they could go ahead and do that, but he would rather use the more accepted Ghanaian convention to thank the people of the country by going to them in person.

He however noted that he would be coming back to the region on a real political campaign tour where he would talk mainly politics.

The president, who was accompanied by high-powered government officials, was scheduled to commission a newly-constructed Accra lorry station in Koforidua and some adjoining stores constructed by the New Juaben Municipal Assembly, but that aspect was deleted from his programme.

Even though he claimed that it was not a campaign tour, he continued to make campaign promises to the people.

The president expressed great concern over the current trend of events on radio where people had been using such media outlets to insult their political opponents.

'It is very sad that electronic media which should be used for education, information and entertainment are now being turned into platforms of insults where every morning people sit on them and heap insults on their political opponents,' he said.

'I am not saying that people should not express their views but we must use civilized language to express our political beliefs without insulting our political opponents.'

President Mahama asked politicians to campaign on issues and not use insults to gain political advantage.

He gave the firm assurance that he would ensure incident-free general elections, saying that the late president was so passionate about free and fair elections and that he as his successor, would religiously stick to that promise.

Almost all paramount chiefs in the region including the president of the Eastern Regional House of Chiefs Daasebre, (Prof) Oti Boateng were present at the durbar.

Also present were members of the Muslim community, the clergy and a cross-section of people of the region, the majority of who were sympathizers of the ruling National Democratic Congress (NDC).

The president, after abandoning the commissioning of the lorry park at Koforidua, went to inspect the Suhum-Apedwa portion of the Accra-Kumasi highway which is under construction, and promised that it would be completed before the general elections.