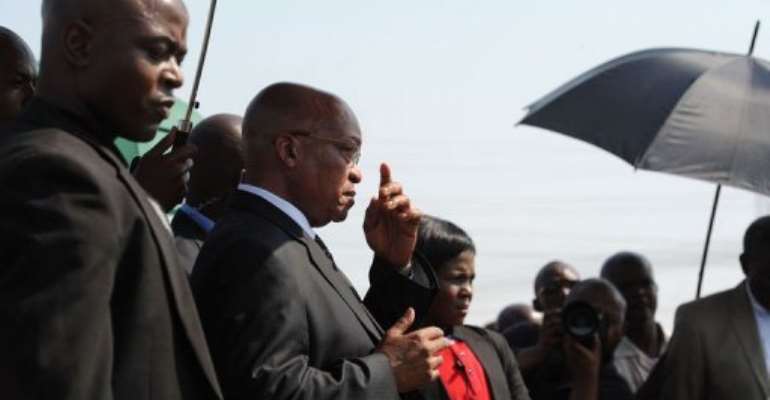 MARIKANA, South Africa (AFP) - South African President Jacob Zuma on Wednesday warned mining firms they could lose their licences if they failed to provide decent housing for workers, a week after 44 miners died in a wildcat strike.

Even as Zuma issued the warning -- following a meeting with striking miners at the Lonmin platinum facility where police gunned down 34 armed workers on strike a week ago -- tensions appeared to be rippling out to nearby mines.

Pointing out that the mining industry has assets valued at $2.5 trillion excluding coal and uranium, Zuma said the sector should be able to pay its workers a better wage.

"In fact it should not be such an industry that has the lowest paid worker, given the wealth they have," he said during a memorial lecture to honour a former leader of the ruling African National Congress.

He also noted that the government issued a directive to improve housing conditions for mine workers two years ago, but an audit conducted at mines in the North West province's Rusternburg platinum belt showed only half were in compliance with the mining charter.

In one case, a company is housing 166 workers in a hostel block with just four toilets and four showers to share between them, the president said.

"Sanctions for non-compliance with the charter include the cancellation of mining rights or licences," Zuma said.

"We urge the industry to take this matter seriously."

Earlier, Zuma paid his second visit to the Marikana mine since Thursday's brutal police crackdown.

"This is painful to all of us. It is not acceptable for people to die where talks can be held," Zuma told about 2,000 workers at a field.

"But I do feel your pain and have come personally to express that. I am certain that the commission of inquiry will get to the bottom of what happened here."

A judicial commission is investigating the Marikana police shootings, which shocked South Africa in the deadliest day of protest since apartheid.

Police are undertaking their own investigation, while the independent police watchdog is also probing the police action.

But that has done little to soothe the tempers among the 3,000 workers, mainly rock drill operators, who launched their illegal strike on August 10 at the Lonmin Marikana mine to demand higher wages of 12,500 rand ($1,500, 1,200 euros) a month.

The strikers say they currently earn 4,000 rand but Lonmin argues that when their bonuses and other allowances are included, the workers actually make around 11,000 rand, with a nine-percent increase set to kick in on October 1.

On Wednesday, similar demands for better conditions were being pressed at the nearby Royal Bafokeng Platinum Mine, where 600 rock drillers downed tools.

The firm's spokeswoman Kea Kalebe said the protest was confined to one shaft, and that the company was still clarifying the demands of the miners, who told reporters they were also seeking a monthly wage of 12,500 rand.

Anglo American Platinum said it had also received a broad list of demands from its workers but declined to comment on the issues raised.

"It's not a wage demand," said the mining giant's spokeswoman Mpumi Sithole.

The new disputes sweeping to other mines emerged following Lonmin's first talks late Tuesday with representatives of the strikers.

Anglican Bishop Johannes Seoka, who facilitated the talks, said the meeting was cordial and that both sides showed a willingness to cooperate.

"If they had talked earlier on, the massacre would have been avoided," he said.

Lonmin spokeswoman Sue Vey said the meeting had not focused on workers' demands, but rather on easing tensions.

Workers who attended the talks meanwhile said they were also demanding the release of the 259 people arrested after last week's crackdown.

"We want our brothers who (were) arrested to be freed, without bail. They must attend the memorial service" Thursday, said Kwenene Msindiseni, a rock driller.

South Africa is preparing services across the country on Thursday, including one near the site of the police killings.

Many of the victims were migrant workers, and most of their bodies have already been returned to their hometowns.