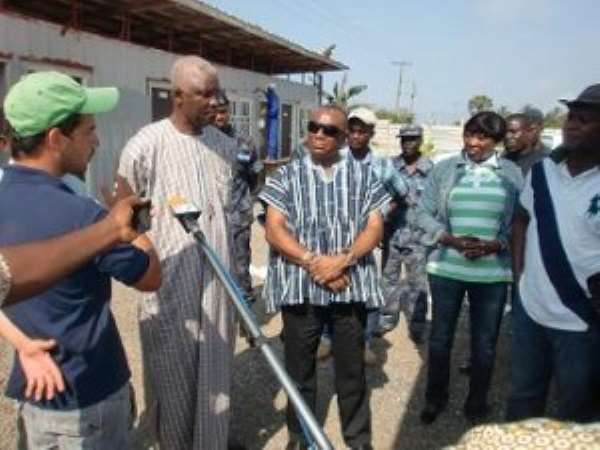 by Samuel Agbewode
The Resident Consultant on the Akplorwotorkor-Anyanui sea defense project from the Ministry of Water Resources, Works and Housing, Mr. Godfred Kwaku, has said that it was imperative thatthe government buildssea defense walls in all the coastal communities, from Ketu to other coastal communities in the Volta Region and Axim, in order to guarantee the total safety of the people in those areas.

The Residence Consultant on the project, who made this known when the Volta Regional Minister, Mr. Henry Ford Kamel, and his Deputy, Mr. Henry Ametefe, as well as the Deputy Minister of Transport, Mrs. DzifaAtivor, visited the area to familiarise themselves with the progress of work, said the first phase of the project was completed, and that the second phase was expected to be completed between November and December this year.

He further revealed that as a result of the completion of the four defense walls, the road from Anyanui to Akplorwotorkor, which was washed away, had been reconstructed.

He said as part of the social responsibility of Amandi Company working on the project, it had reconstructed the Roman Catholic (RC) Primary School that was destroyed by the sea, to ensure that children in the area continued to have access to education.

Mr. Henry Ford Kamel commended Amandi Company Limited for the work done so far, and urged the management and staff of the company to ensure that they complete the project on schedule, because it was one of the projects embarked upon by the government to help improve the living standards of the people.

Mr. Kamel, who later paid a courtesy call on the Awomefia of Anlo, Togbui Sri III, admired his leadership qualities that had brought peace to the Anlo area since he became the Overlord, and stressed that the Regional Coordinating Council (RCC) recognised the role of traditional rulers as being crucial to the development of the region, and promised that the VRCC would do everything possible to ensure greater collaboration among stakeholders.

The Regional Minister noted that peace was a prerequisite to development, and that the prevailing peace in the Anlo area had set the tone for rapid development.More importantly,when the area was identified to have a large deposit of oil and gas in the Keta basin, it was vital to create the needed environment that would promote economic activities in the area.

Mr. Kamel pointed out that the VRCC was aware of efforts being made by Torgbui Sri in helping to develop quality human resources in the area in preparation towards the oil and gas industry, which, he noted, would soon start in that part of the region.

The Regional Minister, therefore, urged the people to unite and live in peace with each other, as the government was making the necessary efforts to accelerate developmental activities in the region.

He said that without peace, the government's efforts to bring the needed development to the region would be of no importance to the people.

Responding, Togbui Sri III commended the Regional Minister for the high level of leadership qualities he had exhibited since he assumed the responsibility as the representative of the President in the region.

He further noted that the VRCC's collaboration with the traditional authorities would go a long way in bringing the needed development to the people.