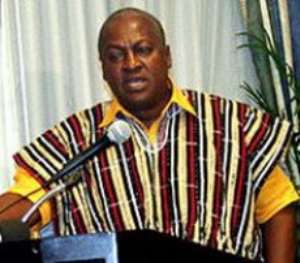 President John Dramani Mahama has assured residents of the Eastern region that work on the Aburi-Nsawam road will soon commence.

The President who is in the Eastern region on his “Thank You Tour” made the commitment when he addressed a mammoth gathering at Aburi, Wednesday.

President Mahama told the gathering he's committed to continuing the good works started by his predecessor, the late John Mills.

According to John Mahama, the elevation of Aburi to a district, was just one of the many achievements that would come the way of the people of Aburi.

The President however expressed his disappointment over his inability to commission the completed Craft Village at Aburi.

The Chief of Aburi, Otubour Djan Kwesi II thanked the President especially for the developmental projects government has extended to the area particularly the creation of the Aburi District.

Otubour Djan Kwesi II said people of Aburi are prepared to assist Prez Mahama in whatever way they could.