In violent S.Africa, leniency for police over mine bloodshed 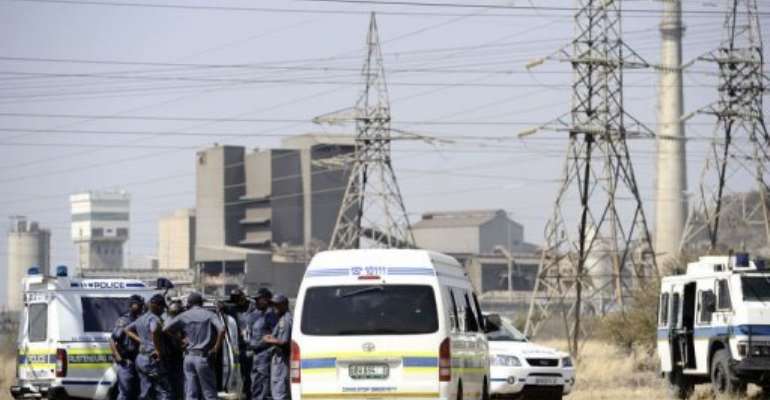 CAPE TOWN (AFP) - South Africa's police are accused of apartheid-like brutality after killing 34 miners but have yet to face any official sanction in a violent society where officers themselves risk being slaughtered.

Police bosses have backed Thursday's bloodbath as self-defence after a wildcat platinum mine strike exploded in a dangerous union rivalry that analysts say should have been resolved before the force was deployed.

"In the end this is a national tragedy and one can ask many questions: why it was allowed to develop to the stage where the police were forced to act?" said Institute for Security Studies analyst Johan Burger.

"Everybody now looks at the police, but I think you need to have a much wider look at what happened there."

Images of police using live ammunition have cut deeply, even in a country virtually inured to excessive crime levels that are at odds with its peaceful march to all-race democracy in 1994.

Police on the front line, tasked with fighting crime in one of the world's most violent societies outside of a war zone, lose an average of 100 officers every year.

The ill-fated officers last week faced a defiant crowd, armed with spears, machetes and guns, after two colleagues were hacked to death days earlier in an initial wave that claimed eight miners' lives.

"When you call police then to deal with the situation, you're actually inviting further aggravation and risk of life and limb because they are not mediators and they just come in at the tail end," said Law Society of South Africa co-chairman Krish Govender.

"They're only trained to handle weapons and to protect property, and their expertise lies in shooting, whether rubber bullets or tear gas, and water cannons and live ammunition."

Speaking at the funeral for one of the slain policemen, police chief General Riah Phiyega told officers "don't be sorry about what happened".

"The callous slaying of police officers continues to go unabated," she said this week after three officers were killed in just four days.

"Despite the continuous onslaught on our members, our officers continue to put their lives in the line of fire to protect the innocent and defenseless of our country," she said.

Police are investigating the 34 deaths, and the police watchdog is probing police conduct in the clash. In addition, President Jacob Zuma is setting up a separate commission of inquiry.

Meanwhile, South Africa has seen a spike in violent protests over the government's track record in fighting crime.

Former police chief Bheki Cele is among those who have called for more firepower, urging officers to "shoot first" to bring down crime levels.

But the use of deadly police force is controversial.

Television cameras last year captured the death of an unarmed protester who was shot with rubber bullets and beaten with batons, and nearly 800 people died in custody or by police action in 2010 and 2011, according to the police watchdog.

Nevertheless, violent crime is now at its lowest level since apartheid ended in 1994. The daily murder rate, which was more than 73 in the first year of multi-party democracy, is now down to 43.

Nomfundo Mogapi of the Centre of Study of Violence and Reconciliation said Thursday's violence was unnecessary.

"The people died because they are trying to fight for their socio-economic rights but also I think the excessive use of force within the police, even if they thought they were really under threat, should not have happened," she said.

Burger believes that the police had little option on Thursday after coming under attack.

"I think they were forced into a situation where they had to defend themselves."

Lonmin and union bosses have been called to be held to account for letting the conflict deteriorate, while the government has also been urged to tackle the root of tensions over massive inequality, graft and joblessness.

"In the end it's in the hands of police and they are merely attempting to maintain law and order," Govender said.

"But they are facing an overwhelming increase of frustration within the population, and it's unfair to be putting police in the front line in these situations."