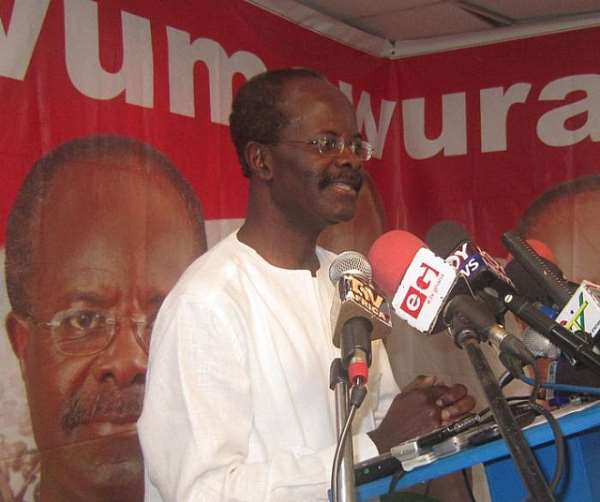 He said governance was a “serious business that must be given to serious people to handle”, and that Ghanaians should do away with the political class that have stood in the nation's progressive path.

Dr Nduom made the call over the weekend at the launch of the party's campaign to capture the Ayawaso West Wuogon parliamentary seat in Election 2012, at Dzorwulu in Accra.

The event held on the theme: “Change Is Coming … Get Involved!”, was also used as a lunch-pad for the PPP's nationwide political campaign for parliamentary slots, and to officially introduce the party's parliamentary candidate for the Ayawaso West Wuogon Constituency, Mr William Dowokpor, a media and development consultant.

Dr Nduom asked the electorate to examine those vying to lead the country in 2012 Election, and identified himself as the most competent among the lot, considering his record of tangible achievements both in government and in private life.

The PPP flagbearer said he was in the presidential race not because he merely thought he was the most qualified or had money to spend, but because he had been called to serve the people.

Dr Nduom said he had re-dedicated himself to the pursuit of public office to bring unequaled progress, peace and prosperity to Ghanaians.

The PPP Flagbeaer said that he had worked tirelessly to forge a new political tradition in the country, focusing on incorruptible leadership, healthcare, education and jobs, which he could confidently deliver to Ghanaians if elected as President of Ghana.

He, however, noted that governance was not an individual business, but one that called for all and sundry to join forces to rid the political system of corruption in order to establish an era of “unprecedented prosperity” in the country.

Dr Nduom said he was in the presidential race to clean the corruption-laden political status quo of the country, and to work to uphold the principles of truth and peace to engender the rapid development of Ghana.

He called on Ghanaian to remove the two leading parties, the National Democratic Congress (NDC) and the New Patriotic Party (NPP) from the political terrain, and vote the PPP to power to put Ghana back on the course to peace and prosperity.

Mr William Dowokpor touted his appreciation of good governance and his commitment to incorruptible leadership as the main attribute he has bought to the race to become the parliamentarian for the constituency.

He said he was convinced that professionals like himself with a deep understanding of good governance needed to move into the arena of active politics “to replace the old tired political system with the new politics that guarantees transformational development to uplift the living conditions of every Ghanaian regardless of political affiliation or background”.

“I am therefore going to Parliament to provide a strong voice to those who live and work in this constituency…..We are on the verge of something special; and that is to win and get residents involved in the governance of our constituency for the first time”.

Mr Dowokpor said that the constituents had voted for political parties in the last 20 years but had not had a true representative yet, saying, “What you have had is a representative of a party, by the party for the party”.

“But what I would offer you a representative of the people for the people by the people…..I come to as the referendum member of parliament, who will involve you in the decisions and contributions I will make in parliament.

“We need to get it right this year in Ayawaso West Wuogon, or the next four years will continue to be frustrating for all of us” he told the large gathering of constituents and polling station executives of the party.

“You deserve an MP, who solicits your views before speaking on your behalf. You deserve an MP who, works had for your community throughout his term of office. This year you can make this happen when you vote for me”, he said.

The Parliamentary Aspirant is basing his campaign on reliability in utility and public service, facilitation of jobs for the youth, advocating the PPP's policy of free continuous compulsory education and the involvement of the constituents in the governance of the area.

The party's polling station executives were sworn into office at the event.