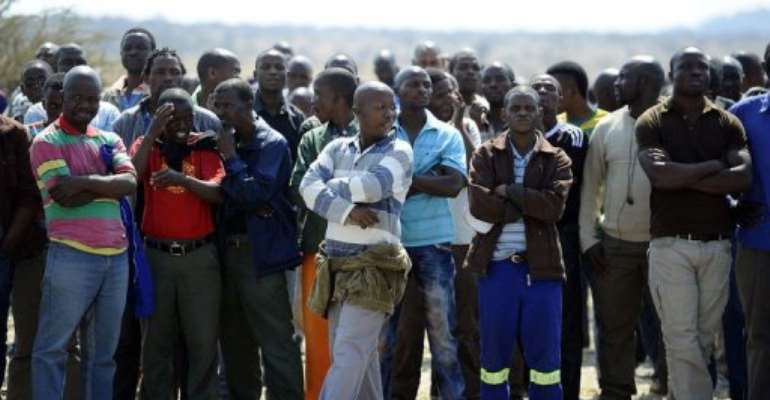 PRETORIA (AFP) - Women chanted and danced on the dusty road, hoping to catch a glimpse of their husbands, fathers or sons who face charges of public violence and even murder after the Marikana mine killings.

"I'm proud. He's going to be strong. He's a man because he was fighting for his rights," said Sindiswa Zazini, 51, waiting Monday for her partner to appear in court in the outlying Pretoria township of Ga-Rankuwa.

He was among 259 men arrested following the police crackdown Thursday at Lonmin's Marikana platinum mine.

All but one appeared in court as he is still hospitalised after police opened fire on striking miners, killing 34 and wounding 78.

Zazini was among 100 people hoping to see their loved ones who were arrested and taken to police cells across the region -- their numbers too large for any one station.

"They don't belong in jail," read a placard held by another woman, scowling outside the courthouse.

The men arrived in police vans, making their appearances in groups in a courtroom far too small to contain them all.

As the convoy pulled up, the women started dancing menacingly towards the vans. One armoured vehicle swerved to scare a woman who came too close. The women responded with laughs and jeers.

Inside Courtroom H, riot police with semi-automatic weapons stood along the police tape separating the accused from the public sitting across the aisle.

Dishevelled and bewildered they filled up half the public gallery.

Magistrate Esau Bodigelo painstakingly explained the court process to the first group of 39 men, but gave a quicker rundown to the many groups which followed.

The accused come from across southern Africa, lured to South Africa by the prospect of work in the country's rich mines, home to more than 80 percent of the world's platinum.

The proceedings were translated into five languages so the men could understand.

Most of those outside the court were disappointed as they never got to see their loved ones. They simply checked lists posted at the court to see where the men were being held.

One man from the eastern province of KwaZulu-Natal found his father's name on the list of prisoners at Bethanie police station, 40 kilometers (25 miles) away.

"He must be freed because he is not guilty. They are fighting for their rights," he said, adding that Lonmin should pay the miners more.

"Each and every day we produce a lot of platinum there," he said.

As the hearings wound down, the police vans left with the men inside singing. Two hands gripped the white iron bars in one window, as a man stared at the setting winter sun.

"I brought him clothes and toiletries, socks, everything," she said, disappointed. "I brought these things but couldn't see him."