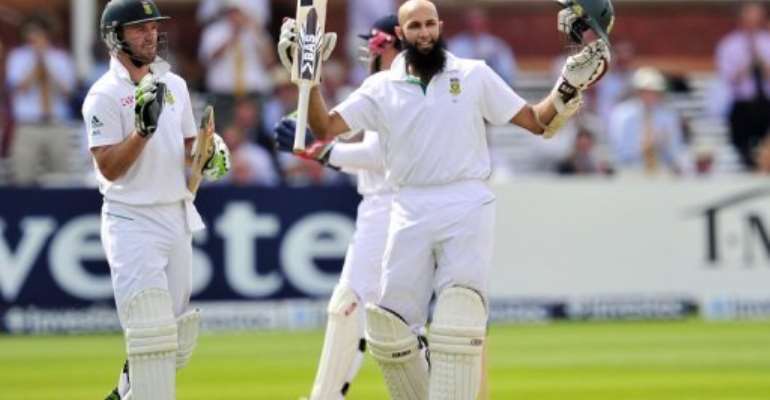 LONDON (AFP) - Hashim Amla's century helped guide South Africa into a strong position on the fourth day of the third Test against England at Lord's on Sunday despite a flurry of new ball wickets from Steven Finn.

South Africa, at tea, were 306 for seven in their second innings, a lead of exactly 300, after a composed hundred from Hashim Amla.

JP Duminy and Vernon Philander, who both made 61 in the first innings, were 18 and 11 not out respectively.

South Africa's total meant England would have to surpass their previous Lord's record fourth innings victory chase of 282 for three against New Zealand in 2004 during the debut of captain Andrew Strauss, now in his 100th Test, if they were to win this fixture and square the series.

Only the West Indies, with 344 for one against England in 1984, have made more in the fourth innings to win a Lord's Test.

South Africa 1-0 up in this three-match campaign, only need to avoid losing at Lord's to replace England as the world's top-ranked Test side.

Fast bowler Finn, who'd taken four wickets in the first innings on his Lord's home ground, took three for 23 in seven overs with the new ball Sunday including the prize scalp of Amla for 124 and at the interval had innings figures of four for 60.

South Africa, having started the day on 145 for three, got through to lunch only for the loss of nightwatchman Dale Steyn although AB de Villiers was dropped on eight when James Anderson put down a routine chance at short midwicket of the bowling of off-spinner Graeme Swann.

Amla, whose South African record 311 not out at The Oval propelled the tourists to an innings victory in the first Test, resumed on 57 not out and didn't score a boundary in Sunday's morning session as he advanced to 94.

But after the interval Amla, who on Saturday survived a tough chance on two when wicket-keeper Matt dropped a one-handed catch down the legside, late cut medium-pacer Jonathan Trott for the ninth boundary of his innings to complete his 16th Test century and fourth against England off 182 balls.

But the elegant right-hander's second Test century at Lord's, following his unbeaten 104 four years ago, came to an end when he was bowled playing down the wrong line by a good delivery, up the slope, with the new ball from Finn.

Amla's innings lasted just short of five hours and together with de Villiers he put on 95 for the fifth wicket.

De Villiers's exit meant Strauss had broken the England record for most Test catches by an outfielder of 120 he'd previously shared with Colin Cowdrey and Ian Botham.

Finn, from around the wicket, then had left-hander Jacques Rudolph caught behind as South Africa, who had been 259 for four, declined to 282 for seven.