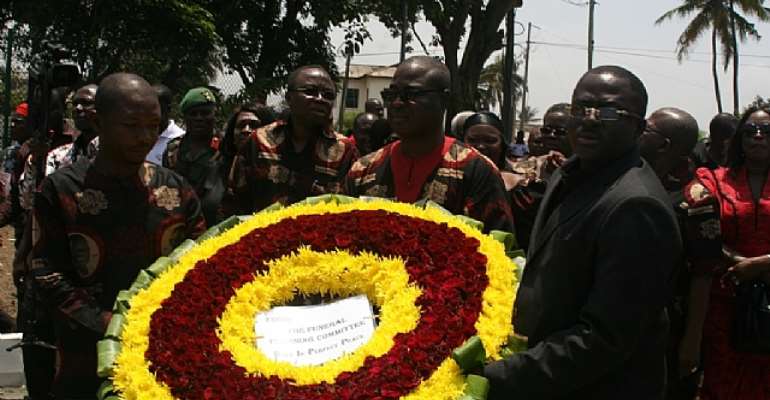 Accra, Aug 17, GNA - The Funeral Planning Committee (FPC) of the late President John Evans Atta Mills on Friday laid a wreath on his tomb at the Asomdwee Park in Accra.

It paid their last respect and held a minute silence in his memory.

Mr Quakyi on behalf of the Committee said in the heat of the funeral preparation it was difficult for them to visit the tomb since each member was assigned to a different task.

He said they worked diligently to ensure that the funeral of late President Mills was successful, and thanked God for seeing them through a successful funeral .

“As we remember our late President Mills who was a brother and a friend, we must continue to give thanks to God for his life,” he added.

Mr Quakyi noted that the demise of the late President Mills would continue to offer Ghanaians guidance and peace in the country.

He announced that the closure of the Asomdwe Park scheduled for Sunday, August 19, had been extended to Tuesday, August 21 becuase Monday, August 20 being a public holiday, many people would throng the park.

Mr Quakyi said the Committee would hold a press conference next week to account for all the donations and contributions received from institutions, organisations and individuals.