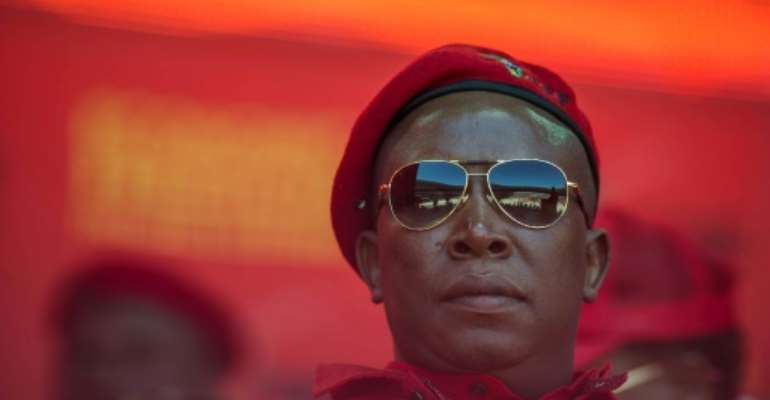 Around 40,000 people turned Orlando stadium in Soweto into a sea of red as supporters roared their approval of fiery EFF leader Julius Malema's promises to seize white-owned land without compensation and nationalise the banks.

The huge turnout was a shot across the bows of the ANC, which failed to fill a similar stadium during the launch of its own manifesto in the coastal city of East London two weeks ago.

"We are not chasing the whites away. We are saying you have too much land. We want you here in South Africa, but 80 percent of the land belongs to us," Malema told the crowd.

The white minority still holds the vast majority of farmland as well as a disproportionate share of the country's wealth, and the EFF is capitalising on black discontent over the perceived lack of change under the ANC government since the end of apartheid 22 years ago.

Malema, clad in the EFF's signature red overalls and beret, promised everything from free land, water and electricity for the poor to flushing toilets in all homes as he campaigned ahead of municipal elections in August.

"We want black communities to be like white communities," he told the enthusiastic crowd.

The ANC, which has ruled since its iconic leader Nelson Mandela took power in 1994, showed in 2014 national elections that it still had overwhelming support.

But it has been hard hit by a series of scandals involving President Jacob Zuma and some commentators predict it could lose a couple of major municipalities in the upcoming vote.

The EFF was founded 2013 by Malema after he was thrown out as the leader of the ANC's youth wing.

In national elections less than a year later it won more than a million votes, taking 25 seats in parliament and becoming the third largest party behind the centrist Democratic Alliance, which holds 89 seats.

This will be the first time the EFF has contested local elections, where issues such as housing, service delivery, poverty and unemployment rank high on voters' lists of complaints.

I don’t know him – Afoko denies knowledge of prosecution wit...
13 minutes ago