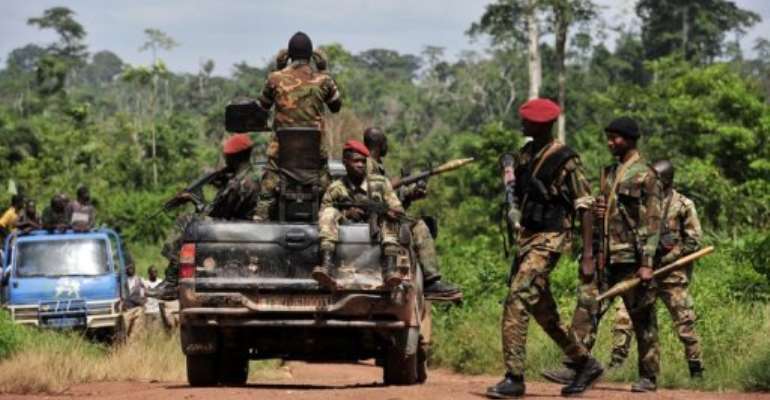 Ivory Coast soldiers patrol near the border with Liberia in June. By Issouf Sanogo (AFP/File)

ABIDJAN (AFP) - A border post at Ivory Coast's restive western frontier with Liberia was attacked Monday by gunmen, an Ivorian military source and residents on both sides of the border told AFP.

The Ivorian source, speaking on condition of anonymity, said an army post at Pekambly near the town of Toulepleu "near the border with Liberia was attacked".

The attack followed another in the frontier region in June that killed seven UN peacekeepers.

No information was immediately available on the identities of the perpetrators.

"There was fighting between Toulepleu and the border, I fled the town," said an Ivory Coast resident.

"We heard heavy gun sounds this morning right at the border," said Alfred Tarleh who lives in a village across a small river on the Liberian side of the border, in view of the town which was attacked.

"It was so heavy that we got afraid and started packing our things to leave the border," Tarleh told AFP, saying the shooting had later stopped. "The rebels have taken over the border on the Ivorian side."

Another resident of the Liberian village, Robert Cole, said: "From where I am, I can see them in T-shirt and jeans. There are at least ten of them at the border, the rest of them are said to be advancing on Toulepleu".

In Toe's Town, Liberia, a few kilometres from the border, residents reported long convoys of Liberian soldiers and immigration officers heading towards the border.

"The soldiers, police and the immigration officers passed with arms in the long convoy," said resident Anita Dweh.

The June attacks were believed to have been carried out by followers of Ivory Coast's former president Laurent Gbagbo, whose refusal to step down after a 2010 election defeat sparked a four-month conflict which claimed some 3,000 lives.

Gbagbo was captured in April last year and has been in custody in The Hague since November on allegations of crimes against humanity.

Diehard Gbagbo supporters are believed to have fled to Liberia after his fall. Liberian mercenaries were also widely implicated in the Ivory Coast conflict.

Human Rights Watch in June reported that these fighters were carrying out deadly cross-border raids in Ivory Coast.