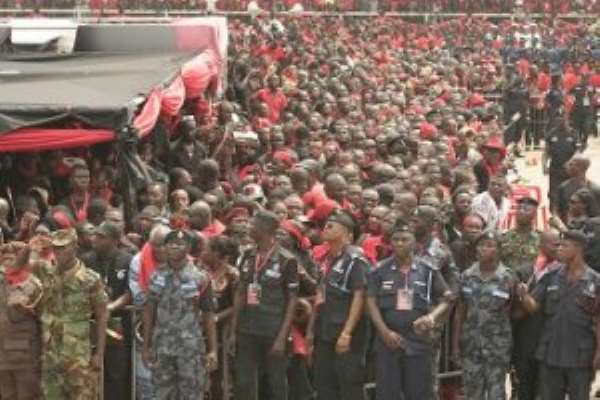 Thousands attend funeral for Ghana's Mills
Thousands of mourners including African leaders, dignitaries and ordinary Ghanaians attended the state funeral on Friday of president John Atta Mills, who died last month ahead of a re-election bid.

Ghana was plunged into mourning after the death of Mills, a veteran politician who became president in January 2009 and was well-regarded for his honesty and integrity.

A military cortege took Mills' body from the State House parliamentary complex, where it had lain in state since Wednesday, to the funeral at Independence Square where more than 10,000 people gathered.

'He entered politics not to amass wealth but to serve people, which he did until his death,' said new President John Dramani Mahama.

The cortege transported Mills' body to the grounds of Osu Castle, the official presidential residence, where he was buried at a ceremony that featured a 21-gun salute and laying of wreaths.

As the motorcade passed through streets, residents lined the roads to get a glimpse, some crying and others chanting. A number of people climbed trees to have a better view.

Among those who viewed the body as it lay under a glass case before the service were Ivory Coast President Alassane Ouattara and Ellen Johnson Sirleaf of Liberia as well as the leaders of Benin and neighbouring Togo.

US Secretary of State Hillary Clinton, who wrapped up an African tour on Friday, also attended the funeral. 'He was like a brother to me. I will surely miss him,' Togolese President Faure Gnassingbe told journalists.

Benin President Thomas Boni Yayi, also the current African Union chairman, described Mills as 'passionate about peace in Africa and in the region'.

His death on July 24 at the age of 68 following an illness came as a shock to many Ghanaians, despite rumours that he had been sick and reports that he suffered from throat cancer.

Mills' brother Cadman said at the service, which was broadcast on national television, that the gratitude expressed by ordinary citizens since the president's death had brought comfort to the family.

For a short time ahead the funeral, a helicopter hovered over the area dropping leaflets reading: 'We want peaceful elections in 2012.' AFP

Ghana mourns as Prez John Mills is buried
Thousands of mourners gathered Friday in the West African nation of Ghana to pay their respects to the late President John Atta Mills, as his funeral was held in the capital, Accra. Mills died last month at age 68, prompting outpourings of grief from many Ghanaians.

Ghanaians from all walks of life, many dressed in the traditional black and red of mourning, thronged Independence Square in Accra to witness the ceremony, in a show of national unity.

U.S. Secretary of State Hillary Clinton was among the many foreign dignitaries who traveled to Ghana for the funeral.

More than 15 heads of state, including almost all the West African leaders, attended the ceremony, which ended with the release of 100 doves into the air.

After the ceremony, the casket was laid to rest near Osu Castle, the seat of government where Mills had lived and worked since he became president.

The late president's body was laid out for public viewing Wednesday and Thursday. Some of the visiting heads of state took turns to file past the body Friday morning.

Giant screens were set up around the country for those who could not travel to Accra to watch the ceremony.

Mills died suddenly at a military hospital a few hours after becoming ill, his Chief of Staff John Henry Martey Newman said in a statement at the time. The president had denied rumors about his health for months before his death.

Mills' death came several days after he celebrated his 68th birthday. He had said he would run for re-election in December.

U.S. President Barack Obama met with Mills when he visited Ghana in July 2009. Obama praised the country as a model for democracy and stability when Mills visited Washington this year, saying that it had become 'a wonderful success story economically on the continent.'

British Prime Minister David Cameron described Mills as 'a tireless defender of democracy in West Africa and across the continent.' CNN

At around 1100 GMT, the casket of late President Mills was moved into the Independence Square by a battalion of soldiers with the Calvary Regiment.

After the burial service, the pallbearers drew the casket on a wheel carrier from the Independence Square in a procession through some principal streets of the capital before burial at the Geese Park, near the Castle, the seat of government, amid sorrowful tunes from the Ghana Armed Forces (GAF) Band.

The casket containing the mortal remains of the late President was lowered into the grave at exactly 1515 GMT before the military buglers sounded the Last Post amidst a 21-gun salute by a detachment of personnel of the 66 Artillery Regiment of the GAF.

A two-minute silence was observed at the graveyard for the late President. President John Dramani Mahama urged Ghanaians to forge ahead in unity to build upon the legacy of peace his predecessor, late John Evans Atta Mills, bequeathed to the country.

The solemn ceremony attracted many African leaders and heads of state of the Economic Community of West African States (ECOWAS) as well as other dignitaries from across the world, including U.S. Secretary of State Hillary Rodham Clinton.

They were joined by hundreds of thousands of Ghanaians from all walks of life donning either red or black clothes to bid farewell to Mills who died at the 37 Military Hospital in Accra on July 24 at the age of 68. Xinhua

Pres John Mills funeral held in Ghana
Tens of thousands of people in the Ghanaian capital Accra have attended the state funeral for President John Atta Mills, who died suddenly in July.

Some 18 African heads of state and US Secretary of State Hillary Clinton witnessed the ceremony in Accra's Independence Square.

Mills, who started a four-year term in January 2009, was succeeded by Vice-President John Dramani Mahama. Ghana has won international plaudits for the swift manner in which it handled the transition in a nation known for its divisive politics. Ghana is seen as a bastion of democracy in an often turbulent region

'Today a dark cloud hangs over Ghana, over Africa and indeed over the entire world,' Mr Mahama told the thousands of mourners who were able to watch the proceedings on large television screens set up around the square.

'President Mills was the very embodiment of what has been missing from our politics – civility, humility in service, honesty,' he said.

People began gathering before dawn in and around Independence Square, dressed in the official colours of mourning – black and red.

Most of the traditional chiefs attended along with their own drummers who pounded out personal messages of grief, she says.

In front of the drummers, dancers performed – the twisting of their hands and arms all had symbolic meanings.

When the military band and cortege carrying the coffin entered the square, the drumming, praise singing and warrior songs stopped, our reporter says.

Mournful flutes played while President Mahama lit the perpetual flame of remembrance for the late president, who was often referred to as 'The Prof' – a reference to his long academic career – and 'Asumdwoehene', meaning Prince of Peace in the Twi language.

The president's body has been taken for burial in a bird sanctuary next to the seat of government, the 17th-century Fort Christianborg, also known as Osu Castle, which overlooks the Atlantic Ocean. BBC