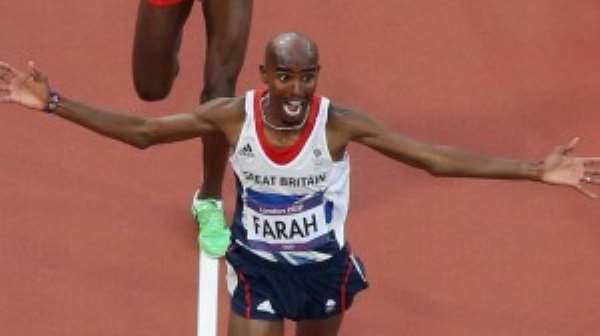 Mo Farah joined the sporting greats and produced an unforgettable crescendo to London's Olympics as he added 5,000m gold to his 10,000m title.

The 29-year-old Briton went to the front at 600m and was roared down the home straight and into the history books.

Farah's gold was Great Britain's 27th of these Games and was greeted with a noise that could scarcely be believed inside the Olympic Stadium.

He produced a last mile of four minutes 00.50 seconds and a final lap of 52.9 secs to hold off Ethiopia's Dejen Gebremeskel and Kenya's Thomas Longosiwa in 13 mins 41.66 secs.

It was not a fast race, but big finals seldom are and Farah got his tactics spot on.

Farah, whose wife Tania is due to give birth to twins in the next few weeks, said: 'It's unbelievable. I was feeling tired coming into the race. When I took the lead, I knew I had to hold on to it.

'Those two medals are for my two girls. They can have one each. I don't know what's going on. Everything has a time and it's all worked out. Two gold medals… who would have thought it?'