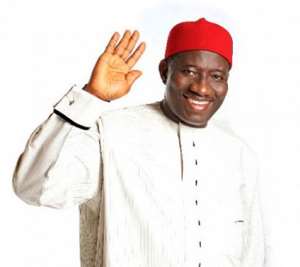 Since the former chief security adviser General Owoye Azazi told Nigerians that President Goodluck Jonathan had stopped him from inviting General Muhammadu Buhari for interrogation on some security issues in an apparent move to show that he did not fail from his responsibilities because of Boko Haram, the question on the lips of so many Nigerians has been; is President Goodluck Jonathan a weak president?

Basically, President Goodluck Jonathan is not a weak president but rather our operational structures that are based on lies and deceits by the colonial masters and sustained by the military juntas are damn too feeble. What is weak are the Nigerian constitution and the political structures. They promote corruption, ethnic and religious war, gender segregation and abuse of privileged positions. The military that does not know what democracy is all about and that understands only commanding words (come, go and stop) gave us a constitution. Can you give what you do not have? Look at the contaminated political structures they gave us that have made it almost practicably impossible for many Nigerian politicians to be in a political party based on ideologies and not on business interest of what goes into their pockets to the detriments of the masses which has dangerously made them to jump from their parties to any ruling party.

Even though I am of the opinion that we should try our female counterparts since male politicians have nothing really tangible to show for their leadership position since 1960 except epidemic corruption, however, no matter the tribe or the gender of the president of Nigeria in today's structure, we will continue to produce presidents that will be tagged “weak president”, “dull president”, “corrupt president” and so on and so forth because the structures we have are not right. Consequently, Nigerian leaders must consider the sensitivity of the people based on their religion or ethnic background to avoid uproar. And on the process of trying to avoid these bumpy structures, they sometimes slump. That could perhaps be the best way to describe the stand of President Goodluck Jonathan against the invitation of General Mohammed Buhari by General Owoye Azazi for interrogation.

Remember, when the former president, General Olusegun Obasanjo was taken from prison and made president in 1999, Nigerians celebrated thinking that their messiah had come because of the nature of his emergence but not up to one year of his administration Nigerians started to rain abuses on him as a failure. Obasanjo, underrating our bad political structures and the force of the cabals against steady power supply in Nigeria had sincerely made the promise of giving us steady power supply within six months if elected as president of Nigeria in 1999. He did not only get the opportunity he had asked for but he got it twice, but the Nigerian structured to fail structures consumed him as his 8 years administration between 1999 and 2007 did not give us steady power supply as the same old national anthem of 'up NEPA' and 'oooooh' that people shout when the light comes and goes still reigns the air in Nigeria even as you read this now. Nigerians tagged him a hard and a brutal president who used his power arbitrarily.

When President Goodluck Jonathan was elected in 2011 people said that a well read man was elected in Nigeria for the first time, they hailed him and jubilated like the way they had always welcomed every military coup during the military era. But barely four months into his administration, they again changed the music to 'oh, we made a mistake to have voted him' as if four months were enough to judge meaningfully. But sadly, President Goodluck Jonathan and his leadership style in security issues have not changed even after one year, thus trying to confirm the fears expressed by Nigerians during the first four months of his administration. Some people threatened before the 2011 general election that if they don't become president that Nigeria will be ungovernable. Nigerians have tagged him a weak president. The story was not different during the time of late Musa Yaradua as Nigerians tagged him a slow leader and a sick president as if we all do not get sick. Haba Nigerians! Then, something must be wrong somewhere that we are yet to identify or are too scared to confront. And as long as we are not ready to remove these cobwebs we all know, no matter the level of someone's integrity one will get consumed in these Nigerian bumpy and pothole set-ups. But what is the root of these cobwebs?

The root of all the problems is insincerity from the colonial masters to the indigenous leaders. Nigeria has got multiple and complex problems that I acknowledge in totality, but if we are honest enough, we would not be where we are today. Fundamentally, the first sincere route to an everlasting solution is to conquer the fears of bondage in us that we may break up, that we may lose our positions or that we may get killed if we speak the truth that it is imperative that we must sit on a round table and talk, and that is, the Sovereign National Conference (SNC). It should be a place where we should frankly and critically scrutinize our existence with the aim of correctively reflecting on issues in order to take care of the future where we all could happily live together with mutual respect to each other's fate and be appreciative of our cultural diversities.

The opinionated fear that Nigeria will disintegrate one day is one the fundamental forces why we have massive corruption and looting. With this mentality, most people privileged in some positions go into alliance with the political looters for protection against prosecution in other to steal from what they have called “national cake” before Nigeria breaks up. Until this fear is gone there will never be real patriotic services from this group. Until we all stand up and demand what is right, no matter who is the president of Nigeria under this structure, there will always be corruption to impunity, bloodshed, sorrow and hatred. Our development will continue to be as slow as a snail movement because that robust or radical development we all are yearning for will continue to elude us.

And my fear under this structure is that, any president produced in Nigeria now is in bondage because if such a president attempts to make a drastic change against the wishes of the vampires in the name of king makers, is most likely to get an impeachment threat that would mean to make a u-turn. And if such a president insisted in doing the right thing, that president would be impeached by the assemblies with reasons that would throw you and me jubilating on the streets without understanding the ethnic and parochial self-interests of Abuja politicians that ignited such impeachment.

Anambra State, one of the most complicated and difficult states to govern in Nigeria until Dr. Chris Ngige's drama that led to his being kidnapped as a seating governor in 2003 should perhaps be a good case study of a failed structure or a polluted system. If Dr. Chris Ngige had not been willed to puncture this structure, Anambra State would have still been under the influence of these so-called godfathers. And as commercial politicians, as long as their political sons and daughters pay the public money into their private accounts to take care of their immediate families, buy expensive cars and deceive people with big chieftaincy titles, the pains we are going through do not really matter. This is the structure we have in Nigeria from the local government councils to the state/national assemblies, governors to the president. Please, even when our political leaders want to be fair, the bitter truth is that they are trapped in this structure. Nigerian masses should in unison stand up and dismantle this parasite called structure or else they should all be silent and be slaughtered like cows.

We often continue to use the US to give examples when it suits us but we will turn more than 100 degrees like a mouse that has seen a cat not to use the same US as our yard stick when we want to commit evil. We seem to have forgotten that the US sat and mapped out their policy and strategy based on their culture, mentality and atmosphere that made it possible for one family like the Bush family to govern America for 16 years in regards to the wish of the people through fair and credible elections. Is this possible in Nigeria under our current structure? The answer is emphatically no, because the first thing that comes to the minds of every Nigerian is to know where a candidate is coming from or his/her religion and not the integrity and the capabilities of such a candidate before his/her bribe can be accepted to vote him/her because the structures have been corruptly narrowed to clan, ethnicity and religion.

The problem of Nigeria is structural, and the beneficiaries are only those few privileged individuals who have turned themselves into political Goliaths and as such untouchables. If the structure is left the way it is presently, Nigeria may fight another war. But may God forbid, at least because of our pregnant mothers and innocent children! But, what if God refuses to forbid? We know that injustice has been done to Nigeria since 1914 but yet we have not sincerely done enough to address the issue? Yes, God can decide not to forbid because you dare not tempt Him. MOSSOB, OPC, Boko Haram and the declarations of autonomy and independence by Ogoni and Bakassi indigenes whether right or wrong are all signs of a failed structure.

Even though President Goodluck Jonathan is right now at the helm of affairs in Nigeria and one of the beneficiaries of these failed structures but sincerely speaking he is not the main problem of Nigeria. Let us go back to the root of our problems and stop postponing the pains of ordinary Nigerians because of a few beneficiaries of these structures who are just too scared to face the reality that the Sovereign National Conference (SNC) is inevitable.

Nigeria is boiling and if we continue to pretend that all is well like the way it is now, I am afraid to say that Nigeria may very soon say "To your tents O Israel", in peace or pieces.