Truth as elusive as militants in Egypt's Sinai 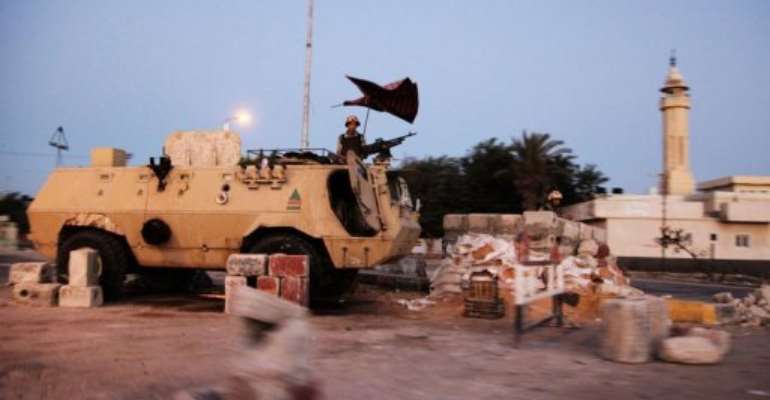 Egyptian soldiers stand on top of an armoured personnel carrier at a military checkpoint in Sinai. By Mostafa Abulezz (AFP/File)

SHEIKH ZUWAYID, Egypt (AFP) - As the sun set over his desert village in Egypt's Sinai Peninsula, Abu Asma sat down to break his Ramadan fast when he heard gunfire from the army outpost down the road. He ignored it, and then a bullet hit his little brick home.

The shooting was over in minutes. Neighbours went to the outpost near Israel's border to investigate and found more than a dozen dead soldiers. Some had been shot in the head.

"Whoever did this was very well trained," Abu Asma said.

The massacre on Sunday, as the neighbours describe it, sent shockwaves across Egypt and prompted the army to launch an unprecedented operation to flush out Islamist militants from the lawless peninsula.

Helicopters crisscross the skies as military trucks haul tanks to the area near the borders with Israel and Gaza in preparation for what the military says will be a decisive confrontation with the militants.

Authorities believe the militants are radical Islamist Bedouins and suspect the involvement of extremists in Gaza.

The military and police have already boasted successes, claiming the killing of 20 militants in air strikes -- the first in the Sinai for decades -- and the arrest of six "terrorists."

But the claims meet with scepticism from villagers who charge that the security forces missed their elusive quarry, who simply melted away into the vast mountainous desert.

Instead the security forces resorted to the arbitrary tactics of the ousted regime of Hosni Mubarak, fanning longstanding grievances against the central government, villagers say.

In Tumah, a small village of sparse brick homes where the air strikes against the militants were reported to have taken place on Wednesday, residents said the military's claims were pure propaganda.

There was indeed a site, on the village's outskirts, which the Islamist militants used as a training base, said one resident of the area, Eid Sawairka. The militants were long gone when armoured personnel vehicles raided the village backed by helicopter gunships, he said.

An elderly man at the village mosque, who gave his name as Abu Mohammed, told a similar story. "There were 45 armoured personnel carriers and police vehicles, and two helicopters. They fired two rockets but they didn't hit anything."

A few kilometres (couple of miles) away, in the village of El-Jura, residents showed AFP the site of a helicopter rocket strike on Wednesday morning.

"I heard a whoosh, and then an explosion," said Mohamed Yusef. The rocket punched a hole in a cinderblock wall of a storehouse for dry wood metres (yards) from his home, he said, dangling the spent rocket in his hand. The other landed in the sand.

"It was completely random," he said.

The close-knit Bedouin say they have not heard of a single tribesman killed in the security force campaign, and no dead or wounded were taken to hospital.

When asked to square the military and state media's version of events with that of villagers, a military official insisted: "This account has been reported by all the official media."

-- 'The people they are looking for have vanished' --

In the town of Sheikh Zuwayid, some 15 kilometres (nine miles) from the border with Gaza, relatives of the men soldiers and police arrested scoffed at their description as "terrorists."

One of those arrested, 72-year-old Eid Said Salama, was feeding his goats when masked security men stormed his house and took him away in handcuffs, his wife said.

They also raided his neighbour's house, hauling off 68-year-old Selmi Salama Sweilam and his son. They ransacked the house, spilling barley and wheat onto the floor and emptying out closets and cupboards, she said.

Several of those arrested -- who all appeared to be ultra-conservative Muslims -- had been detained without charge under Mubarak's regime, after a series of bombings between 2004 and 2006 against tourist resorts on the South Sinai coast.

For years, the security forces have floundered in the strategic peninsula, where the army's presence has been heavily restricted by the 1979 peace treaty between Egypt and Israel, under which Israel pulled out its troops and settlers.

Since Mubarak's overthrow in February last year, Islamist militants have exploited the upheaval to establish a launchpad for increasingly brazen attacks on security forces, a key gas export pipeline and on neighbouring Israel.

In Sunday's attack, the militants commandeered an armoured vehicle from the outpost and forced a soldier to drive it into Israel, where they were killed in a helicopter strike.

Israel has agreed to ease the restrictions set by the peace treaty, in the hope that the army will flush out the rebels.

But Bedouin activists if the security forces are to succeed in the long run, they must address the longstanding grievances of the Bedouin, who say they have been treated as second class citizens ever since Israel handed back the peninsula it had seized in the 1967 Middle East war.