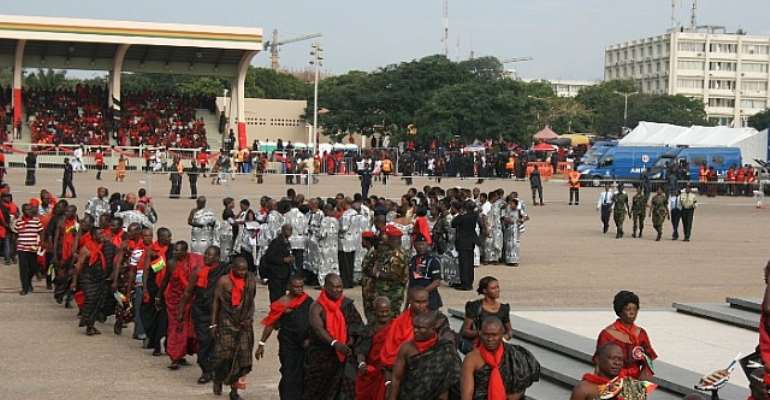 Accra, Aug. 10, GNA - All is set for the burial service at the Indeppendence Square in Accra for the late President John Evans Atta Mills.

The square is decorated with black and red and under a not too bright weather with mourners from all walks of life from Ghana, Africa and elsewhere who have thronged there to celebrate the death of the 68-year-old President.

It is also vibrating with the sounds of various musical instruments and choral music in memory of the Ghanaian leader who would soon be buried at the Geese Park, a few metres from the Square. There are also cultural displays to mourn the death of the late President.

Thousands of chairs have been added to increase the sitting capacity of the already filled Square.

Many people are in long queues waiting to be admitted by security personnel into the square to take part in the burial service of the late President.

The gargantuan crowd at the square is a symbol of the admiration of the man whose vision was to build “A Better Ghana” and is credited for making unprecedented achievements for his nation in the three-and-a half years administration before he died at the 37 Military Hospital in Accra.

The day, declared a national holiday, climaxed the three-day mourning designated by the Government.

The event is being carried live by national radio and television stations as well as almost all the private media.

Some media men are busily setting up their accoutrement while others are already set for the coverage of the service.

In the middle of the square has been erected a tent in the shape of a dome on which the body of the late President would be laid, a few metres away is another tent for dignitaries attending the service.

The colours of the tent for the Executive are red, gold and green and inside the independence arch are also another group of mourners with the frontage decorated with the Ghana flag.

All flags in the country have been flying at half mast since his death and the AD 1957 epitaph has also been decorated with black and red cloth while paramedics, ambulances and first aid personnel have been stationed at the square for emergencies.

The service would commence at 1000 with the arrival of President John Dramani Mahama and his entourage, followed by the arrival of the Presidential casket. The national anthem would be played after which President Mahama and dignitaries would file past the body and the lighting of the perpetual flame.