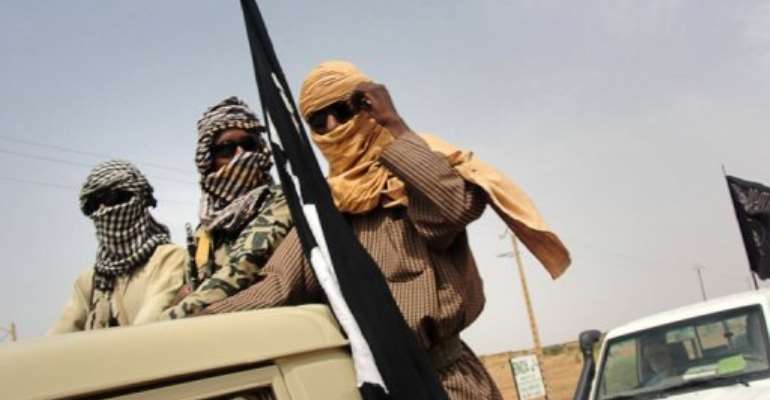 A fighter of Islamic group of MUJAO stands guard near the Gao airport. By Romaric Ollo Hien (AFP/File)

BAMAKO (AFP) - Mali's government said Thursday that military intervention in the Islamist-held north was 'inevitable' as the jihadists defied mediation efforts and cut off the hand of a thief.

The west African nation's embattled interim authorities said the act showed the limited use of dialogue in finding a solution to win back the north which has been under Islamist rule for over four months.

"Every day, while efforts for a negotiated solution are increasing, the practices of terrorists and drug traffickers cloaked in a false religious veil lend weight to the inevitable nature of the military option," a statement read.

The grisly punishment -- the extremists' first reported amputation -- came a day after Economic Community of West African States (ECOWAS) top mediators made an unprecedented visit to the north for talks with Islamist leaders.

"Yes, I confirm it. We applied sharia in Ansongo yesterday (Wednesday)," a leader of the Movement for Oneness and Jihad in West Africa (MUJAO), Mohamed Ould Abdine, told AFP.

"The hand of a thief was cut off. Sharia demands it."

A local government official in the town who witnessed the public amputation told AFP: "There was a lot of blood when the hand was cut. It was the hand of a thief who stole a motorbike."

Abdine said the sentence was in accordance with "the law of God".

Last Sunday scores of protesters had swarmed the main square in Gao to prevent Islamists from cutting off the hand of another thief, but Abdine said the sentence had only been put off.

"We will do the same thing in Gao soon," he said. "Last time we postponed because of the intervention of important people and not the population. The population can't do anything."

In the small town of Aguelhok, another armed Islamist group, Ansar Dine (Defenders of Faith), publicly stoned an unmarried couple to death in late July. They have also forced women to cover up and whipped smokers and drinkers.

In the ancient city of Timbuktu, Ansar Dine have destroyed World Heritage-listed shrines from the 15th century, denouncing them as idolatrous.

The Islamist groups -- which security experts say are acting under the aegis of Al-Qaeda in the Islamic Maghreb (AQIM) -- seized key northern cities in the chaos that followed a coup d'etat in the capital Bamako on March 22.

The takeover was spearheaded by Tuareg rebels seeking an independent state for their nomadic desert tribe, but the extremists have pushed them aside and seek an Islamic state in the zone, an area larger than France or Texas.

However the group's spokesman Senda Ould Boumama on Thursday told an Islamist website called "Defenders of Jihadists" that it planned to unite the country and create an Islamic state.

"We hope to be able to peacefully convince the people of this country to join us so that all our efforts can be directed against the common enemy," said Boumama, referring to non-Muslim "miscreants".

UN leader Ban Ki-moon on Wednesday called on the Security Council to impose targeted sanctions against the extremists, a suggestion which was backed by the Malian government.

In Bamako, the interim authorities who took over from the junta have stood by helplessly as the Islamists have tightened their hold, and are now working to form a stronger unity government on the orders of ECOWAS mediators.

ECOWAS has 3,300 troops ready to deploy in Mali, and the UN Security Council is ready to approve this, but is awaiting a formal request from Bamako as well as more information on the size, means and mandate of the proposed force.

Finalising these plans is expected to be on top of the agenda at a five-day meeting by representatives from ECOWAS, the EU, African Union, UN, European Union and Malian government which starts in Bamako on Friday.

Salamatu Hussaini Suleiman, ECOWAS commissioner for political affairs, warned that, if Mali is allowed to become a safe haven for terrorist networks, "no country in Africa or outside the continent will be safe."

"We are running out of time in Mali," she said.