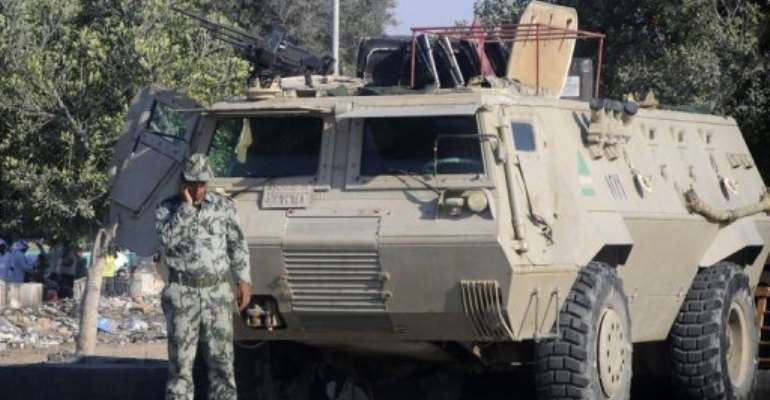 A member of the Egyptian security forces speaks on the phone while securing an area in El-Arish on the Sinai peninsula. By - (AFP/File)

CAIRO (AFP) - Gunfire broke out Thursday in the Sinai town of El-Arish, reports said, as tensions simmered after the Egyptian authorities vowed to crush a surge in Islamist militancy in the tense peninsula.

It was not immediately clear, however, if the shooting was linked to the government campaign launched to restore security in the peninsula following a weekend attack on a border post that killed 16 soldier.

State-owned Nile News television said clashes erupted between police and gunmen outside an El-Arish police station, but the official MENA news agency reported that the gunfire was an isolated incident.

A security official "denied reports that the... police station in El-Arish came under fire," MENA reported, in an account backed by witnesses who said they did not see or hear any clashes.

MENA said a man driving an unlicenced car had fired several shots in the air on the street housing the police station, without aiming at it.

The conflicting reports came a day after the military said helicopter gunships were deployed in raids that killed 20 militants in Sinai.

"Elements from the armed forces and interior ministry supported by the air force began a plan to restore security by pursuing and targeting armed terrorist elements in Sinai, and it has accomplished this task with complete success," the military said on Wednesday.

The air strikes in Tumah village -- the first in the peninsula for decades -- came as security forces massed near Rafah on the Gaza border for what they called a decisive confrontation with the militants.

A senior military official in Sinai said "20 terrorists were killed" in Apache helicopter raids and when soldiers from the 2nd Infantry Division stormed Tumah.

The militants had been trying to escape when the helicopter targeted their vehicles.

Other security officials in the north of the peninsula reported air strikes near the town of Sheikh Zuwayid, close to the village.

The fallout from Sunday's attack, the deadliest for Egyptian troops in decades, spread to Cairo where President Mohamed Morsi sacked his intelligence chief and two generals.

Morsi's opponents have used the deadly Sinai incident to attack the Islamist president, whose Muslim Brotherhood has good relations with the Hamas rulers of the Gaza Strip.

The militants themselves are believed to be mostly Bedouin, with support from hardliners in Gaza who view even the Islamist Hamas, which condemned the attack, as too moderate.