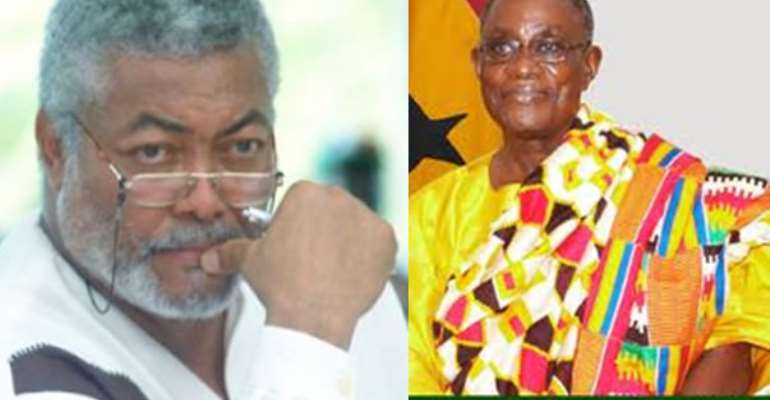 We first published this feature last year after the demise of the late President Mills. It has been republished to mark the first anniversary of the late president's death. The Writer, Manasseh Azure Awuni, is a Senior Broadcast Journalist with Joy FM, Accra, Ghana.

If there's ever one great achievement I should praise myself after 68 years of existence on this turbulent planet called earth, then it was my ability to resist the temptation to reply you. Not only did you reduce my personality to that of a nonentity but you also created the platform for boys and girls young enough to be my children to subject me to ridicule and contempt.

Like a refuse dump, I endured all the insults and your humiliation with peerless stoicism. But today, I'm unable to keep quiet and allow you to go on this way. I make this appeal not for my own sake, but for the sake of Naadu and my family members, who are already swaying wearily under heavy weight of indescribable grief.

I heard you on the BBC the other day and I couldn't help but shed tears. I was not surprised that such words could come from you, but I was sad that after all these years of serving you and doing everything humanly possible to please you, you still have not found a place in your heart to recognise this.

Mr Rawlings, in that interview you said if I had done something wiser, I 'could probably have survived another six or seven months.' This was after you said that the cancer affected my ear and eye and I could not concentrate for more than three hours a day.

I can't tell if you were in the place of God to determine how long I could have lived. But what I know for a fact that if you, your wife and those who like you had shown me a little love, I could have lived for a few more years.

The deterioration in my health, I think, had more to do with psychological torture than a physiological breakdown. Any healthy person put in my shoes might not have survived after a few months of going through the hell you created for my presidency. What made the vulture bald is enough to kill the crow. And I can say that the frustration and depression that conspired with ill health to put me here after many years of battle was enough to finish any healthy person in months.

Mr Rawlings, I didn't die a happy man. This is not because I had not paid my dues to our dear nation. I have served this nation well as a public officer, a sports administrator, a teacher and a politician. But I spent sleepless nights during my presidency thinking why nothing I did seemed to please you and others around you. I was aware, long before I became president, that anybody in that position must expect opposition. But in my case, I had to contend with both internal and external opposition and nothing I did seemed to please people.

Ever since you granted that BBC interview, the discussion about my death has shifted from sympathy to blame. As usual, you've provided my detractors with weapons to attack and they are firing from all angles. And I don't understand why you and my haters now care so much about my life. Indeed, you're behaving like outsiders weeping more than the bereaved and now pretend you now wanted me to live. Are you offended you will not have the opportunity to torment me again?

I must, however, say I have no regret going at this stage. I believe the Lord I served knew it would happen. He also permitted it to happen. His ways are not our ways and his thoughts are not ours. I know everything happens for a reason, and Ghana has more to gain that lose in my demise.

In the first place, my death brought about unity and has poured cold water on the tension that was hitting its climax in the run up to the 2012 elections. It is also the best thing that has happened to the NDC in recent times. Our party had too many factions with deeply entrenched positions. So dangerous was this that if I refused to contest the primaries, the party could have been torn into shreds.

But I think the party is now stronger than ever since we reclaimed power. This is not only good for the umbrella family, but also for the health of our democracy.

Another gain my death has for Ghana is the enormous lessons you have to learn. The events leading to my death only confirms what the Bible says in Proverbs 18:21: 'Death and life are in the power of the tongue, and those who love it will eat its fruit.'

Many people swore that Atta-Mills would become the first one-term president in the Fourth Republic. And they have got it. That's the fruit of their tongue.

In recent past, we heard about the Rawlings government and the Kufuor government. However, when it was my turn, it became the 'Mills/Mahama' government. First I thought it was an attempt to destroy the political future of my hardworking vice president by soiling him with any dirt of my administration. But it turned out to be what was uttered by the tongue of Ghanaians. Perhaps, Ghanaians can learn to utter positive things about their nations and it will surely come to pass.

Another lesson from which Ghanaians stand to gain is the fact that life is meaningless and there's no point hating, killing and trying to bring one another down because of power. A few days ago, not many Ghanaians could come near the Osu Castle. I also had my private house cordoned off by security personnel and at any point in time someone had to be awake because of me.

From where I lie now, I see life as meaningless. Now I share the same building with ordinary people. I sleep here together with that mad woman who was knocked down by a vehicle the other day, and many other categories of persons no one would want to be associated with. That is the reality of life, which I think Ghanaians should learn. Death is, indeed, a leveller.

I also see now that life is not about wealth. Real wealth is the impact you make in the lives of others when you're alive. When I was being rushed to the 37 Military Hospital that Tuesday afternoon, I did not pick with me an office pin. And when I was been dumped here, no designer wear was used to cover me. Here I am, cold and naked.

When you told your 'Atta Mortuary Man' joke at our Tamale Congress, people think it was too insulting for my personality. But All of a sudden, I'm in the hands of mortuary man who utters disdainful words. 'His Excellency John Evans Atta-Mills' was my name a few days ago. But the mortuary attendant contemptuously refers to me as 'the body.'

I don't know how much my ex-gratia would be, but what I know is that no pesewa would ever get to me. All is vanity, indeed.

Mr Rawlings, I see life differently and I think instead of spending the rest of your life to vilify me, you can do yourself a favour by learning from my life and death. No one will ever become a stone. Everyone is bound to go. That is the certainty. What is uncertain is where, when and how we shall go. Yours may be better or worse than mine so be moderate in your attacks of me. You don't know your end.

When I got to the office that Tuesday, I didn't know that before sunset, I would cease to be the President of Ghana. Whether I lived longer or not, it would have come one day.

But as I have stated, I have no regrets. I lived my life for humanity. I wanted to see others happy and did the best I could to bring myself to the level of the ordinary person. But the quest to demonise me clouded everything I did. I tried to share the pain of others. But all I heard was that Atta-Mills is bad. I sometimes felt like weeping because only the negative side was known. And they still believed every lie and malicious rumour about me even when some journalists came out to confess that they had been publishing falsehood about me.

Until my death, no journalist ever mentioned that I called to sympathise with them and apologise to them in person when others mishandled them. I was a true believer in quiet diplomacy and did not want to practice my piety in public as the good book admonishes us against. I could have called invited Cyrus De-Graft Johnson of Joy FM to the castle in the presence of cameras in order to score a political point. Or better still, I could have publicly called on the AMA Mayor to apologise to him after his guards manhandled the journalist.

Mr Rawlings, I don't think the Atta Mills debate will end soon. But I appeal to you in the name of the Lord to spare me any more disgrace. I have suffered a lot.

I know I was not an angel. I had my shortcoming. But is left with the Lord I served to judge me where I am now.

You too were not an angel either. Your administration fraught with problems but we helped you to succeed. There was corruption in your presidency and some of your ministers and government officials under your watch were later tried and jailed for corrupt practices. Even your wife was fingered and tried. Our elders say a drum may sound differently from what its maker intended. If you think you were infallible, I think otherwise and I pray Ghanaians to forgive me in whatever way I erred.

I wish you well and hope that you will help to conduct the 2012 elections in a peaceful manner. We have no option but to make this country better for the future generation. This is the only country we have and we must not send our people out to be refugees in other lands. From where I lie, cold and naked, I don't think it is worth dying for someone to gain power. I realised that Tuesday afternoon that when your time is up, no amount of power, wealth or influence can make any difference.

I greet all Ghanaians in the name of our Lord Jesus Christ. We shall all meet again when Christ appears, in all his glory and splendour, to welcome those who were never ashamed of Him into His eternal kingdom.

Until then I remain your humble servant,

John Evans Fiifi Atta-Mills, or 'the body' as the mortuary attendant here calls me.

I lied that you contracted covid-19, you didn’t also chop co...
45 minutes ago