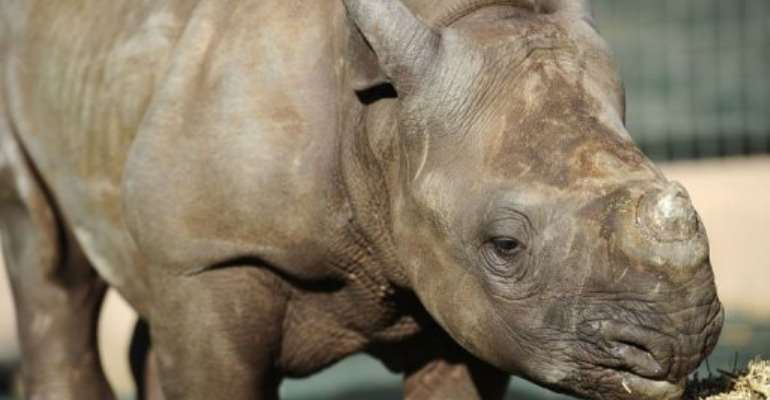 Entabeni is one of the world's only dedicated orphanages for rhino calves. By Stephane de Sakutin (AFP)

MOKOPANE, South Africa (AFP) - The baby black rhino slurps milk greedily from a cola bottle, hops around and chases its caregiver in South Africa's newest and largest orphanage for calves whose parents were poached for their horns.

The fat-buttocked, four-month-old male rhino is the first resident at the orphanage at the Entabeni Safari Conservancy, which hopes to nurse it back to health and give other hundreds of other rhino babies a second chance at life.

The youngster doesn't yet have a name -- but it does have a personality.

"He'll want to feel your hair and your face with his lip and he wants to get into everything he's not allowed to. He's just like what you'd imagine a little four month old to be," said Alana Russell, an American conservation student and one of the 100-kilo (220-pound) calf's five caregivers.

Located under a mountain range in the rolling green savannah near the city of Mokopane, about 250 kilometres (150 miles) north of Pretoria, the orphanage is a non-profit offshoot of a swish tourist resort whose visitors pay to see South Africa's famed megafauna.

Almost 300 rhinos have been poached across South Africa since the start of the year, after 448 were killed last year. The country is home to about three quarters of Africa's 20,000 or so white rhinos and 4,800 critically endangered black rhinos.

Numbers are dwindling at an alarming rate thanks to increased poaching as black market demand for rhino horn soars. Made of the same material as finger nails, the horns are smuggled to Asia, where they're used in traditional medicine, even though scientific research shows they have no medicinal properties.

A third of the slain rhinos are either pregnant cows or mothers with a calf, said Karen Trendler, an esteemed conservationist at the orphanage.

"Sadly, in many instances there are calves that are orphaned as a result of the poaching and we were concerned that there was a need to address those to provide field response specialist care," said Trendler, known fondly as "Mama Rhino" for having raised around 200 baby rhinos over two decades.

"Now there's a specialised rhino orphanage that can take the calves and provide that care that they need," she said.

Once it's completed in mid-September, the orphanage will care for between 25-30 young rhinos that would otherwise have likely died.

It will include four high-care rooms and one intensive care chamber where sick calves receive 24-hour attention and can be treated in an incubator.

"As they become older, we will release them into areas bigger and bigger and bigger, until they are about two-and-a-half to three years old, and then obviously they are released back into nature," the conservation manager Arrie van Deventer told AFP on a recent visit to the facility.

If contact with humans is limited, rhinos can successfully re-adapt to the wild.

Behind him, workmen were putting a layer of 10-centimetre (four-inch) cement onto the care shelter's concrete roof, so falling rain won't scare the traumatised little animals -- a sign of the care put into the project design.

The first orphan -- the young black rhino -- is being housed elsewhere in the reserve until the orphanage is finished.

This one is not a poaching victim -- its mother rejected her calf, which was found with a protruding rectum and still needs intensive care.

After its treatment, human contact will be limited, Van Deventer said.

"In the orphanage, the only human contact will be the handlers. When he goes out it will never see that human again."

Two adult white rhinos -- Mike and Nanna -- will act as surrogates to "teach the rhino to be a rhino".

Visitors to the resort will not be allowed to see the animals in rehabilitation, and academic researchers would undergo strict screening before being allowed to study the animals. The project's unofficial motto is "No tourism, no commercialism".

Once they reach around three years in age, the calves will be released in the reserve or donated to breeding programmes elsewhere in the country.

The project managers hope one day they will have hundreds of orphanage graduates to boost the animals' numbers.