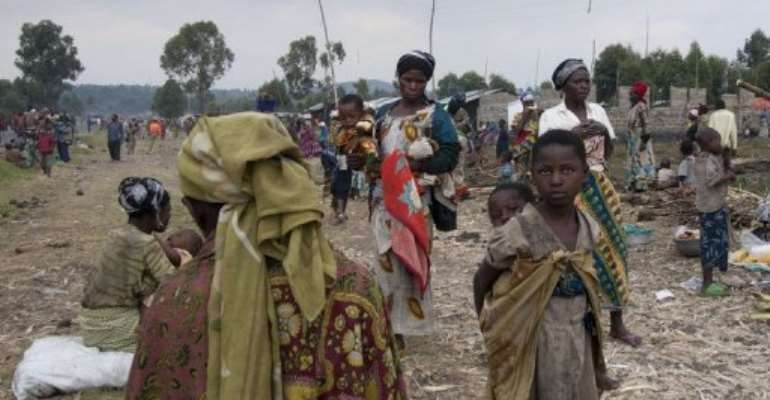 People stand in a street market on the outskirts of Goma. By Michele Sibiloni (AFP)

GOMA, DR Congo (AFP) - A local military commander in the Democratic Republic of Congo said on Monday he was ready for an expected assault on the eastern city of Goma by insurgents.

"We have three regiments, or around 3,000 men on site, we put in place artillery posts, mortars, tanks, two multiple rocket launchers," General Lucien Bahuma Ambamba told AFP after a visit with United Nations officials in Goma.

His comments come as UN humanitarian chief Valerie Amos prepares to visit the region Tuesday to discuss ways to beef up relief efforts.

The UN mission in DR Congo, known as MONUSCO, has some 17,000 troops, deployed mainly in the east, to protect local residents.

The east of the country has been at the centre of heavy fighting between government forces and the M23 rebels, who broke away from the Congolese army in April to launch an uprising.

The rebels led by Bosco Ntaganda, who is wanted for war crimes by the International Criminal Court, are now closing in on Goma, capital of Nord Kivu province bordering Uganda and Rwanda.

"We have a comprehensive plan drawn up with MONUSCO," Ambamba said, adding that he was not worried about the assault.

He admitted the DR Congo's FARDC army troops had retreated during combat two weeks ago, saying it was because they had not eaten for three days but that the issue had been dealt with.

The troops on the ground now had "good morale," he said. "They have been paid and fed."

He also denied rumours that officer's families had left Goma ahead of the expected assault, claiming it was information circulated by the M23 as part of a "psychological warfare."

I weep for Ghana for allowing Medusa-like head judgement de...
38 minutes ago