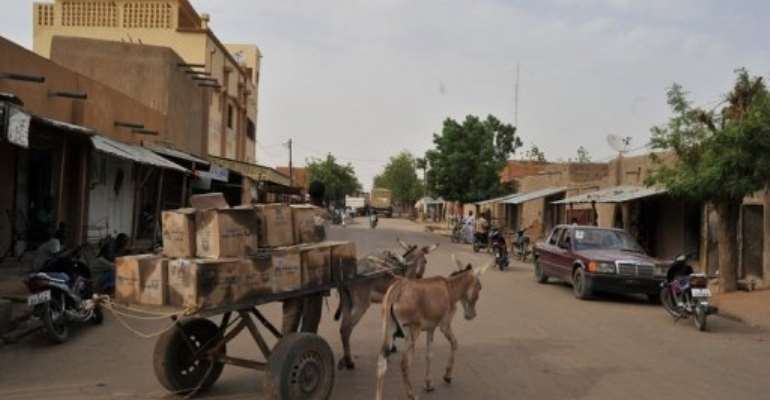 The residents of Gao have kicked back against the Islamist occupation. By Issouf Sanogo (AFP)

BAMAKO (AFP) - A radio presenter was badly beaten by Islamists occupying the northern Mali town of Gao after he reported on a protest in which they were stopped from cutting off a thief's hand, hospital sources said Monday.

"The presenter Abdoul Malick Maiga, beaten by the Islamists on Sunday night, is still in hospital. He regained consciousness but is still in intense pain," a doctor at the hospital told AFP on condition of anonymity.

"I saw him this morning (Monday). He has scratches on his eye. He explained that the Islamists came to arrest him as he was commenting on the population's refusal to accept the amputation of a thief's hand," he added.

Another doctor said the presenter had been beaten "with a stick by the Islamists who accused him of criticising them."

Hundreds of people protested on Sunday night in Gao against Maiga's detention and demanded his release, setting fire to a car belonging to a leader of the Movement for Oneness and Jihad in West Africa (MUJAO) which controls the town.

The Islamists fired shots into the air to disperse the crowd.

On Saturday MUJAO announced on private radio they would amputate the thief's hand at a town square, but were met by hundreds of protesters on Sunday who stormed the square, preventing the sentence from being carried out.

According to local sources, the accused was a young MUJAO recruit who had stolen weapons to re-sell them.

"We don't want to know what this young man did, but they are not going to cut his hand off in front of us," a resident said on Sunday.

This is the first report of the extremists attempting to carry out an amputation since they occupied the north of the country four months ago, enforcing strict sharia law.

The residents of Gao have kicked back against the occupation, and MUJAO had eased up on the application of sharia after violent anti-Islamist protests in May left one dead.

The Islamist groups, which security experts say are acting under the aegis of Al-Qaeda in the Islamic Maghreb (AQIM), seized key northern cities in the chaos following a coup d'etat in Bamako on March 22.