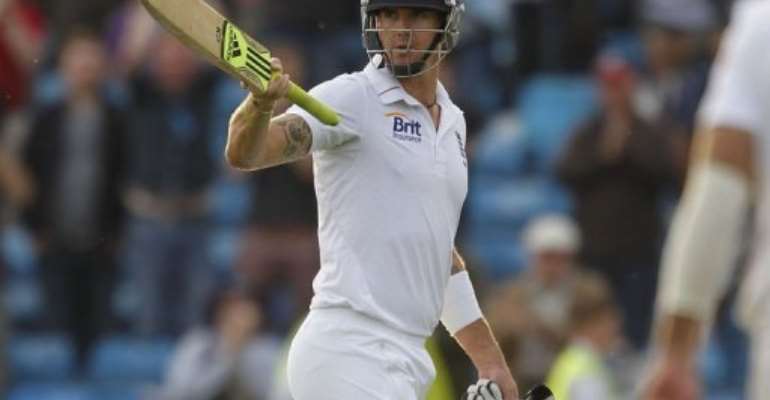 England's Kevin Pietersen acknowledges the crowd after the close of play. By Ian Kington (AFP)

LEEDS, United Kingdom (AFP) - Former South African fast bowling great Allan Donald compared Kevin Pietersen to West Indian legend Brian Lara after the England batsman hit his team back into the game with a spectacular century on the third day of the second Test at Headingley on Saturday.

Pietersen launched a savage assault after tea, hitting 149 not out as England reached 351 for five at the close, 68 behind South Africa's first innings total of 419.

"It reminds me of when I ran into Brian Lara, something in the category of a bit of a genius to play knocks like that."

Pietersen said his last two centuries, one in extreme heat against Sri Lanka in Colombo and Saturday's 212-ball effort, were the best two of his Test career.

"Today was against an unbelievable bowling attack that keeps coming at you and never gives in. To get runs against that attack is something I will always cherish."

On a day when fortunes turned dramatically against them in an extended afternoon session, South Africa suffered a further blow shortly before the close when captain Graeme Smith had to be helped from the field after injuring his left knee in chasing a ball to the boundary.

"He said he felt something in his knee," said Donald. "He will be assessed overnight."

Until Pietersen cut loose, South Africa had been ahead in a battle of attrition as England struggled to 173 for four at less than three runs an over.

Alastair Cook (24), Andrew Strauss (37) and Jonathan Trott (35) all fell to disciplined bowling after lengthy but not particularly productive stays at the crease.

South Africa struck what seemed a crucial blow shortly before the tea interval when Ian Bell was caught at first slip off Jacques Kallis for 11, leaving Pietersen to rebuild the innings together with new cap James Taylor.

The match changed after the break. South Africa brought back fast bowlers Dale Steyn and Morne Morkel to put pressure on the diminutive Taylor but it was Pietersen who took charge, slamming 26 runs off 11 balls in a thrilling passage of play.

In a continuation of the duel between the two players in the first Test at the Oval, Morkel sent down a series of bouncers, bowling from around the wicket and challenging Pietersen to take on two fielders on the legside boundary.

Pietersen was dropped at short leg by Hashim Amla off Morkel on 52 but then thrashed the next two balls to the midwicket boundary.

With Pietersen in such dominant mood, Taylor was able to feel his way into Test cricket in a supporting role and batted soundly as he made 34 in a fifth wicket partnership of 147 before being bowled by Morkel.

Pietersen reached a relatively conventional fifty off 90 balls with nine fours -- although it was already by far the most aggressive innings played by an England batsman -- then raced to his century off another 52 deliveries with eight more boundaries.

When he was on 85 he became the eighth English batsman to score 7000 Test runs.

His 21st Test century -- his third against South Africa -- came in the first over with the second new ball. After a brief period of consolidation he launched another burst of scoring, hitting 22 off 11 balls, including a straight drive which nearly decapitated Steyn and a dismissive swat to midwicket in Steyn's next over followed by a straight six off the next ball.

He then batted more cautiously towards the close to ensure he would be at the crease to resume on Sunday.

Pietersen said he was flattered to hear that Donald had compared him to Lara.

"Allan Donald was one of my heroes growing up, so that's special," he said.

"I've never batted better in my life," said Pietersen. "I got a big wake up call against Pakistan (in January and February). I was a bit overweight, I wasn't physically in as good a nick as I should have been and I averaged twelve and a half which really hurt, because I set myself high standards.

"I took it on the chin and I went and spent hours and hours with (England bowling coach) Mushtaq (Ahmed)."