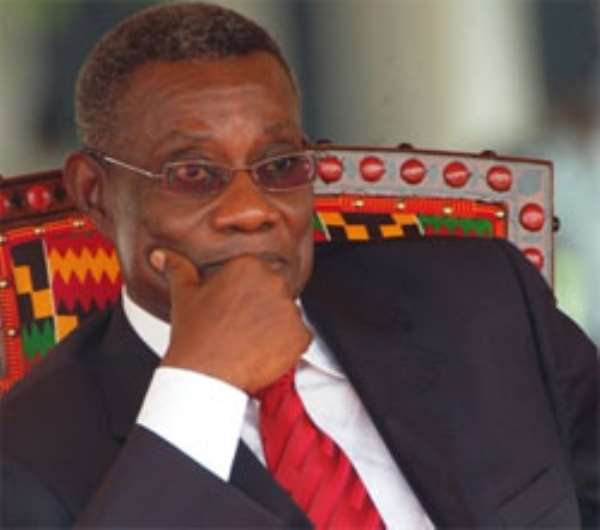 It's sad that in our period of mourning for our beloved deceased President Fiifi Atta Mills, some hot controversies are raging over where and when he is to be buried. Of course, such bickerings are not unusual in our traditional society during funerals of prominent personalities.

It is customary that disputes or misunderstandings arise in some of our funerals.

The current wranglings over where to bury the deceased President seem to have been engendered by the Funeral Committee set up by the government, the composition of which appears to be wrong, in the view of those who are knowledgeable about our tradition and customs.

Fact is, the deceased was a President of the nation, presiding over the politico-economic affairs of all of us in Ghana, therefore, the Funeral Committee should have comprised persons of different political persuasions- the NDC, NPP, CPP and PNC at least, people with wide range of political and cultural perspectives who can sober down on policies and actions which may not be offensive but can please most part of the society.

In the case of the present hullabaloo over the choice of  the Flagstaff House (it is wrong to call it 'Jubilee House', for what is boldly written on the outer wall is 'FLAGSTAFF HOUSE'), the Presidential palace, as a place suitable for the burial of the late President, what one can simple say is that it is a wrong place.

Remember, l have already alluded to the Flagstaff House as 'Presidential palace', a residential place of any sitting President. And therefore is it not abstruse to have a living President sleeping in the same vicinity of a deceased President?

Spiritually speaking, I am of the strongest opinion that ghosts exist. Those who are dead are indeed living in the spiritual world, and they sometimes visit their former houses and family members. As a spiritual man, with a good deal of spiritual experiences, I say with all certainty that there are ghosts. And anyone who has the charismatic gift of spirit discernment quickly acknowledges this truth.

Jesus himself confirms the existence of ghosts when He explicated that 'a ghost does not have flesh and bones as you see I have'. (Luke 24:39). That means, a ghost is a spirit, and when human beings see them, they usually become 'startled and frightened'.

Therefore, when President Mills is buried in the Flagstaff House, there is every possibility of his revealing himself to the next President or his wife or any of his children or relatives staying there, and the ensuing trauma may cause physical or psychological disease. President Mills's ghost can make an instant apparition and vanish, or can make contact through dreams.

But either of these can be a rare, once-a-while experience, yet it can have a bad trauma on the person who experienced that.

This is not a surreal argument but a matter-of-fact sensible exposition which the Funeral Committee should not frown upon so to make an unpardonable mistake of burying the deceased President at the Flagstaff House.

NKRUMAH MAUSOLEUM
What must be borne in mind is that the Flagstaff House is completely a residential place, and it sounds really quixotic to appropriate any part of that piece of land as a cemetery. This could be a highly indecent act which breaks ethical norms.

The Funeral Committee is therefore making a big mistake for choosing the Flagstaff House. It should quickly reverse its decision. After all, most people are against that idea, and that Committee should remember the wise saying that: 'the voice of the people is the voice of God'.

In view of the escalating opposition to the Funeral Committee's choice of Flagstaff House, the next consideration is the Kwame Nkrumah Mausoleum, which should be the best preferential or most suitable buried place for the deceased President Mills.

After all, the Mausoleum is large enough to provide a resting place for comrade Atta Mills who himself was a strong disciple of Osagyefo Dr. Kwame Nkrumah.

This is a fact everybody knows. Was comrade Atta Mills not the person who glorified Nkrumah with a deserved embossment of his (Nkrumah's) effigy on the two Ghana Cedis notes? Was he not the person who named the Takoradi Oil Ship as 'MV Kwame Nkrumah'?

Was he not the person who canvassed for the endorsement of '21 st September' (the birthday of Osagyefo Dr. Kwame Nkrumah) as Africa's Day which is celebrated with a holiday observed by all African nations? Does this not amount to a kind of uniquely excellent exaltation and honour which the deceased President Mills gave to Dr. Nkrumah?

Lastly, was it not the selfsame Atta Mills which restored the name FLAGSTAFF which, probably out of political chicanery, had been disingenuously and ridiculously changed into JUBILEE House just to extirpate or erase the longstanding Kwame Nkrumah charisma which has been associated with the name FLAGSTAFF HOUSE?

Indeed the name FLAGSTAFF HOUSE has correctly been eponymous with Osagyefo Dr. Kwame Nkrumah, and no amount of ruse can be applied to disrupt such this strong correlation, and President Mills unmistakenly appreciated this linkage and eponymn concerning the Flagstaff until he died. Thus, is it not most fitting and proper to bury him where his own master lies entombed?

His burial at the Mausoleum will synchronize tourist attraction to the place, instead of encouraging bifocal visitation, one to the Mausoleum to view Dr. Nkrumah, and another to Flagstaff House or to the Castle to look at Atta Mills's remains.

The latest thinking that the deceased Mills should be buried at the Castle is also unfortunate. The Castle is a working place, and it is never a proper place to bury him. He must rest in quietude, not in a place where human activity, noise or human hustle and bustle keep going on.

Once again, the NKRUMAH MAUSOLEUM is the BEST resting place for comrade Atta Mills, therefore a quick programme to bring that place into good shape for his burial should be undertaken there.

POSTPONE BURIAL DATE
By virtue of his one-time position as the President of the nation, Atta Mills was, in our Ghanaian cultural estimation, the King of Kings, the foremost leader of all the kings or chiefs of the country.

This being so, it is to be argued that the deceased must be given a ROYAL BURIAL by Akan traditional standards in point of tardy or belated burial date, family tradition rituals, widow's confinement customary rites (devoid of fetish traditions) etc. Besides, Atta Mills was a royal in his Otuam Odumna family, and was said to have been holding the position of 'Obaatan', the living grandfather (the custodian and consultant) of the family.

Therefore, upon the death of such a personality, he must be given a royal treat, and thus buried in about two or three months' thereafter and not within two weeks. Was he a pauper who had died in an accident?

In the circumstance, Atta Mills should advisedly be buried in September or October ending- possibly in the first week of either month, when workers must have been paid to get money for the funeral.

APPEAL TO GHANAIAN CHIEFS.
The burial date fixed to be August 8-10 is therefore unfortunate- tending to give the impression that Atta Mills is a person of mean or little calibre, and his corpse must be quickly thrown away or discarded so that Ghanaians can get their electioneering programmes going on.

Of course, that is the meaning by our Akan cultural standards, and therefore the issue of his early burial must be dropped immediately to allow for the normal royal state burial later.

A time must be given for some proper preparations for the royal burial in two or three months. Meanwhile, the government can encourage electioneering campaigns to go on next week or thereafter.

But if this can inconvenience most Ghanaians, owing to the fact that we are all immersed in grief, then the government can initiate moves to postpone the elections to say, February 7, next year.

Or the family, the Otuamhene, Omanhene and the Central Region house of chiefs and the National House of Chiefs (the custodians of Ghanaian culture) and the Council of state can corroborate in regard to, firstly, the three months' burial ideal proposed; and secondly, the February 7 elections.

The elections date must be a flexible constitutional edict, and when the whole nation is grief-stricken, we stoutly have reason to postpone it.

By the way (and may God forbid), if any of the flagbearers unexpectedly dies or is incapacitated a month to the polls, can we still cling to the December 7 deadline for the elections? Shan't we postpone it? Ghanaian Chiefs, arise and don't allow for the demeaning of ex-President Atta Mills by his burial next week!

MILLS'S DEATH PROPHESIED
Once again, two weeks to President Mills's death, there was a prophecy of Prophet Arko Williams that the Castle was going to be shaken by grief with the death of President Mills within 17 days and the congregation should pray for him. The next day, a call with the number 0277-945425 reached me from the Prophets' Secretary relaying the news to me.

However, try as we did to get in touch with him, we were not successful. And that still beats our minds. Yes, man proposes, but God disposes. Condolences to all Ghanaians.