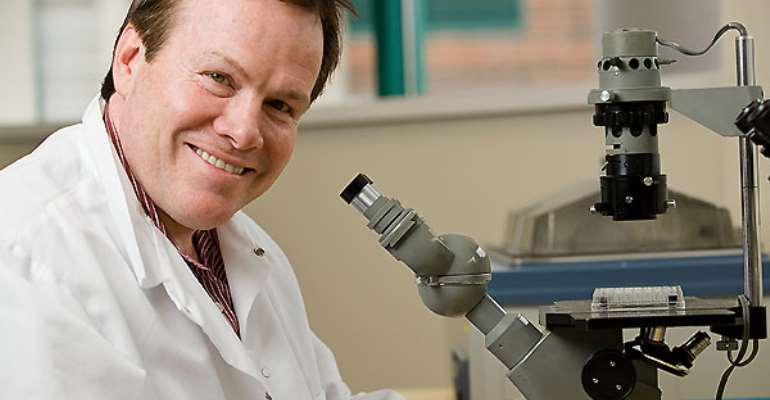 Miami, Aug. 3, GNA - Professor David Watkins, Vice Chair of Research in the Department of Pathology of the Miller School of Medicine, University of Miami, has been awarded a US 9.9-million dollars grant to develop an HIV Vaccine.

The five-year grant, which is from the National Institute of Allergy and Infectious Diseases of the US, is to enable Prof Watkins and his team to investigate ways of making an effective vaccine against HIV using the Yellow Fever Vaccine.

Addressing journalists from 25 countries in Africa, Europe and Asia on a tour Prof. Watkins said he would be exploring the idea that “We can insert fragments of HIV Virus into the yellow fever vaccine and use this to induce immune responses against the HIV virus”.

The tour, which was part of the just ended World AIDS Conference held in Washington, and sponsored by the US State Department, was to expose journalists to the HIV status in the US and tour some health facilities rendering services to HIV patients.

Journalists also had the chance to interact with some men, who have sex with men, and have contracted the virus.

Prof. Watkins noted that he would be collaborating with the International AIDS Vaccine Initiative in New York and the Scripps Institute in California.

Other collaborators would include groups from Oswaldo Cruz Foundation in Rio Janerio, Brazil, home of leading experts and producers of the majority of the world's supply of yellow fever vaccine.

The Vice Chair had played a key role in uncovering how some rare HIV-infected human control replication of HIV and a vaccine could lead to novel vaccine strategies.

Currently, about 30 million people are currently living with HIV world-wide.

Prof. Watkins joined the Miller School Faculty early this year and has become a key member in its acclaimed HIV and AIDS research programmes, which recently was recognized by the US National Institute of Health as Florida's first nation's most prolific and promising AIDS research institution.

With its new designation, the Miller School's Developmental Centre for AIDS Research, will be transitioning to a full Center for AIDS Research and will receive an increase in its National Institutes of Health's funding of nearly seven million dollars spread over a five year period to enhance existing research and nurture new research in HIV and AIDS.

Prof. Richard Cote, Managing Director and Dr Joseph R. Coulter Jr Chair of the Pathology of the Miller School of Medicine, both expressed their extreme joy for the work done by Prof. Watkins and the hounor done to the school.

“He is a real leader in the department's efforts to help solve some of the most complex medical problems facing people throughout the world and a tremendous asset to the already world-wide renowned programmes at the Miller School and Dr Watkins work on HIV and AIDS and dengue fever research has a potential to impact the lives of millions people”, Dr Coulter Jr added.