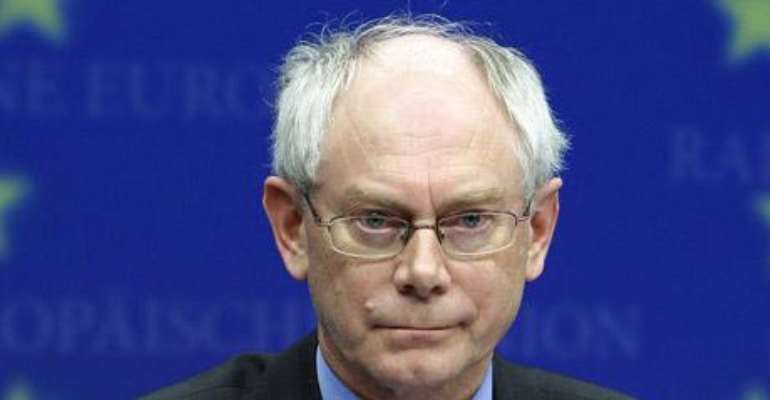 Kyebi, Aug.2, GNA - The President of the European Union (EU), Mr Herman Van Rompuy, has said Ghana has great potentials that needed to be tapped for the development of the country.

He said the EU, as a development partner, would continue to assist Ghana to tap those potentials.

Mr Rompuy said these when he and the Chairman of the Slat Group of companies, which included Ghana Oil Palm Development Company (GOPDC), Mr Pierre Vandebeeck, paid a courtesy call on the Okyehene, Osagyefo Amoatia Ofori Panin, at Kyebi in the Eastern Region.

He appealed to Ghanaians to ensure peaceful polls devoid of any tension or violence in December.

Mr Rompuy expressed sadness at the death of President John Atta Mills, and congratulated President John Evans Mahama on the assumption of office as leader of the country.

Mr Rompuy trusted that President Mahama would help Ghanaians to realize their dream of becoming a prosperous people.

Osagyefo Amoatia Oforipanin commended the EU for supporting Ghana and Africa, and expressed the hope that the assistance would be increased.

He said the decision was in recognition of the fact that poor traditional agrarian practices had contributed to diminished food production.

Osagyefo Amoatia Ofori Panin said the immediate mandate of the University College was to teach students ways of reforming agrarian culture towards increased food production, and the protection of the environment.

He said it was the expectation of the founders of the University College that it would become the centre of the debate on hunger, food production and earth sustainability.

Mr Vandebeeck praised the Okyeman and Osagyefo Amoatia Ofori Panin for establishing the University College, and promised that the company would assist to ensure its rapid growth.