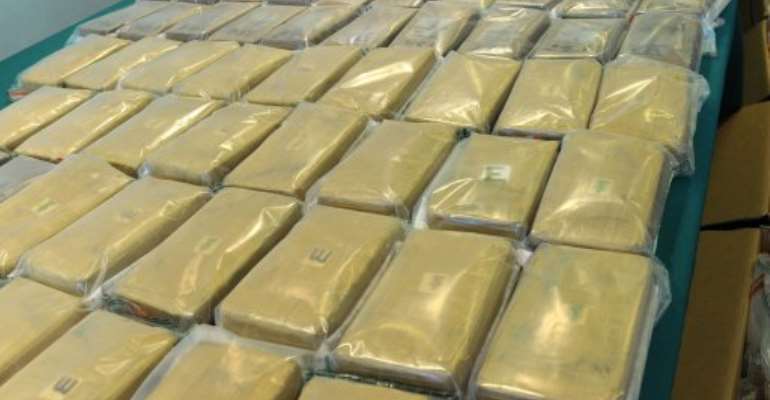 Guinea-Bissau has long been considered a key platform for the trafficking of cocaine, pictured, and other narcotics. By DALE de la REY (AFP/File)

UNITED NATIONS (AFP) - The UN Security Council is considering calling a summit on Guinea-Bissau and expressed concern Monday that drug trafficking in the troubled West African state has grown since a junta seized control in April.

International efforts to broker a return to constitutional rule in Guinea-Bissau have been blocked by military leaders, many of whom already face European Union and African sanctions.

"The members of the Security Council condemned the continuing interference of the military in politics and expressed their concern with reports of an increase in drug trafficking since the April 12 coup d'etat," said a Security Council statement issued after a meeting on the crisis.

Guinea-Bissau has long been considered a key platform for the trafficking of cocaine and other narcotics from South America to Europe. Some reports have implicated top military officers in the trade.

The Security Council renewed its demand for a return to constitutional rule and is considering calling a "high-level" meeting on Guinea-Bissau, said the statement, read by Colombia's UN ambassador Nestor Osorio, the council president for July.

The meeting could bring together the United Nations, the African Union, the European Union, the Economic Community of West African States, the Community of Portuguese Speaking Countries (CPLP) and key nations watching the crisis.

The council called on UN Secretary General Ban Ki-moon to "actively engage" in efforts to harmonize efforts by the different regional groups to get a grip on putting pressure on the junta.

The Security Council said the international summit should produce an "integrated strategy and a roadmap with short and long term actions for the full restoration of constitutional order."

Since independence from Portugal in 1974, the country's army and state have remained in constant conflict. No president has ever completed a full term in office.