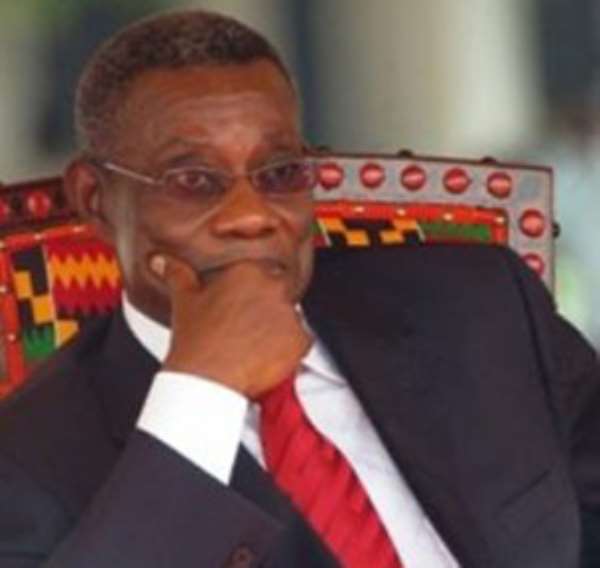 I really find it difficult sticking to the rules of custom and tradition in place in relation to the dead. On the death of a Ghanaian especially an Akan, custom demands that nothing bad is said about him or her. Tradition further requires the observance of certain strict line of action - not to aggravate the plight of the grieving or the bereaved family while the remains is not yet interred, by making damaging utterances or revelations.

However, a concerted effort by certain insatiably greedy, selfish and nation wreckers that seemingly accelerated the death of the late President Mills can no longer wait without rebuke. From former Chief of Defence Staff and current National Security Advisor, Brigadier-General Joseph Nunoo-Mensah, he prevailed on President Mills not to step down. When President Mills felt his body was too weak to absorb further needless insults from the Ghanaian public, he turned to his security capo for advice. On many occasions, Mr Joseph Nunoo-Mensah could not be a realist in his consideration of the requests put forward by a face ravaged by grief. President Mills was insisting the stress from the insults by the public, those in his party and the opposition parties were killing him softly. The Holier-than-Thou Nunoo-Mensah, an agent from another planet without any earthly knowledge of Ghanaian politics of insults and how devastating they are, encouraged him to be like the biblical Job.

I listened to a live interview granted to NESPA radio UK this afternoon (Sunday 29 July 2012) by one of the female siblings of the late President Mills called Mary. She was interviewed by Rabbi. In a nutshell, she said the late President Mills was found to suffer from cancerous tumour six years ago. I do not want to recount all that she said but for the reader's information, she alleged stress may have contributed to her brother's untimely death.

The politics of insults which, the late President always advised against but unfortunately ignored by his own ignorant Deputy Ministers like Kobby Acheampong, Omane Boamah and others, with rebuttal by the public ravaged President Mills' health, resulting in his premature death.

May all of us found in a way or another to have done anything to occasion the late President Mills' death bow down our heads in shame and beg for God's forgiveness?

I will come out with an extensive write-up to lambast all those greedy NDC bastards who pushed President Mills around just for their selfish ends. Nii Lante Vanderpuye, Koku Anyidohu etc. get ready for castigation for I will come down heavy on you.

Minority MPs stage walk out on approval of deputy ministeria...
8 minutes ago

The Ministry dispatched personnel to ask DCOP Opare-Addo why...
8 minutes ago