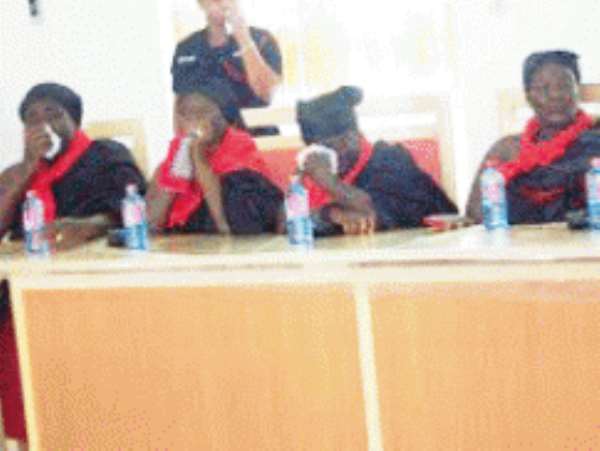 The President of the Central Regional House of Chiefs, Dasebre Kwebu Ewusi said the loss was a big blow to the region and the nation.

The Chiefs and Queens in traditional mourning clothes, wore solemn faces while others wept.

Grief was written on their faces, they took turns to sign the book of condolence.

Dasebre Ewusi said it was obvious that God had plans for the country and added that all that happened was the will of God.

The Central Regional Minister, Mrs Ama Benyiwa Doe said for her, the late Prof Mills was a brother. “I knew him long before he came into politics, at the University of Ghana and he related to the high and low.”

She said Prof Atta-Mills who was the first President to have come from the region, thought about the development of the region until his death and added that the loss was disheartening.

She gave the assurance that the NDC government would continue to work to continue what Prof Atta-Mills had begun.

Nana Ama Amissah, queen of Mankessim and President of Central Regional Queens Association who led the queens asked for prayers for the leadership of the country in this time of grief.

In a related development, the Central Regional House of Chiefs and the Oguaa Traditional Council have paid tribute and expressed their condolences to the bereaved family and the wife of the late president.

In a statement read on behalf of the Regional House of Chiefs Dasebre Kwebu Ewusi VII, said before his appointment to the high office as President, he endured himself as a brother, a father and a friend in the region.

Dasebre Kwebu Ewusi on behalf of the Standing Committee Members of the House said the late president never upheld himself high above anyone but humbled himself as a servant of the country.

Dasebre Kwebu Ewusi who is also the Omanhen of the Abeadze-Dominase Traditional Area said the late president Atta-Mills gave consideration to all manner of suggestions and issues brought before him and that his death had brought sorrow and anguish, particularly to the region and the country at large, which “we cannot forget”.

He said his achievements during his short time as the president of the republic of Ghana is immeasurable as he worked and performed creditably adding that the region has lost an illustrious son whose governance has deepened democracy in Ghana.

The Chiefs pledged their support for President Mahamasendeavours to continue the better Ghana Agenda the late president championed.