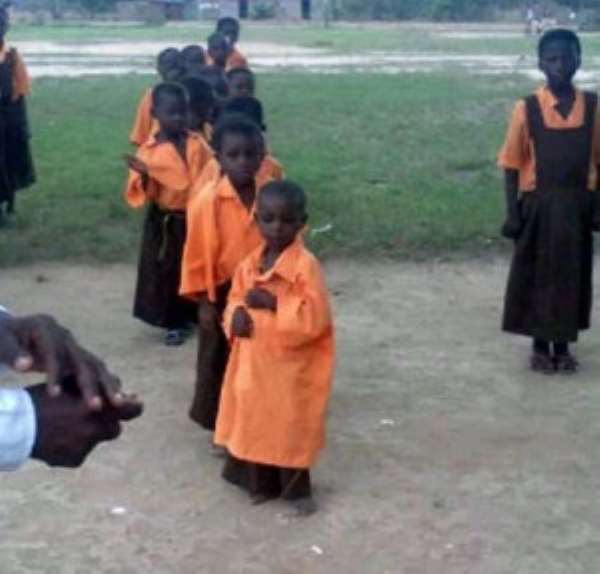 Ebo Quansah in Accra
A picture, according to the sages, tells the story better than a thousand words. The picture of uniforms hanging loose on school children and making them look haggard tells the story of how those who conceived and implemented the idea of free school uniforms without inputs from parents and school authorities, cared about our poor innocent school kids.

The idea of school kids wearing uniforms for them to identify with the institutions whose colours they advertise, and to make them appear smart.  Definitely, smartness cannot be one of the major attributes of children in what looks like sacks hanging loosely on them.  Those who conceived the idea of providing these loose things, for which the state of Ghana is billed GH¢40 per uniform, cannot claim to care about these children.

If anything at all, the journey to the bank, occasioned by the huge returns on the investments in the policy, could be the main motivating factor in putting our school kids in sacks. The difference between GH¢40 and the real cost of these uniforms, by conservative estimates, GH¢10 each, is the real thrill for those promoting the idea of clothing our children in these sacks.

The uniforms are speaking louder than words. They tell much about how our officials care about me and you in a failed 'Better Ghana.' It also tells why the 'Better Ghana' concept may not feature on the campaign trail. Now, the group of people whose care has come more in words than actions are up in arms against the main opposition party on the use of a new slogan: 'People Matter, You Matter.'

According to Mr. Gabby Otchere Darko, Executive Director of the policy think tank Danquah Institute, and a member of the NPP Manifesto Committee, the new slogan: 'People Matter, You Matter: Building a sound and fair society of opportunities and hope for every Ghanaian,' was conceived by party stalwarts after a lengthy interaction within the party.

Mr. Otchere-Darko says that the mantra was proposed as the title of the NPP Manifesto, as far back as August last year, and was adopted at a brain-storming session at Aburi on December 6, 2011. A copy of the draft manifesto was presented to NPP flagbearer, Nana Addo Dankwa Akufo-Addo, by Prof. Yaw Twumasi, retired head of the Political Department of the University of Ghana, and a leading light in the opposition party in February this year. It is, therefore, not true that the NPP took the title from the NDC.

At the campaign launch of Nii Lante Vanderpuiye, Presidential Aide and NDC parliamentary candidate for the Odododiodoo constituency at Bukom Square in Accra at the weekend,  loud-mouthed Okudzeto-Ablakwa, Deputy Minister of Information, said the NPP should stick to 'All Die Be Die' as the party's slogan.

He said the NPP had been going round the country making noise and accusing the NDC of stealing their slogan – People Matter, You Matter. 'They cannot confuse Ghanaians, because everybody knows their slogan -'All Die Be Die.' Those who say 'All Die Be Die' can't say they care for the people they want to die. People cannot matter to you when you say 'All die Be Die.' For us, the people matter and you matter.' He did not say when the NDC coined the new mantra, though.

So far, no official of the NDC has educated Ghanaians on how the party came by that slogan. What is not in doubt is that in the run-up to the 2008 presidential and parliamentary elections, Dr. Paa Kwesi Ndoum, presidential candidate of the Convention People's Party, coined the campaign slogan: 'Yeresesamu,' a clarion call for changes in the political order at the time. Without any explanation, the NDC and its presidential candidate, Prof. John Evans Atta Mills, took over the mantra and campaigned on that slogan.

There are many people out there who believe the slogan contributed significantly to the success of the party and its leader at the December 2008 polls.

At the weekend, the Institute of Economic Affairs (IEA) in Accra announced that the think tank would step in and determine who has the right to use the mantra in the campaign. Mr. Ransford Gyampoh, a researcher at the Governance Unit of the IEA, told Joy News in Accra that the institute would investigate who came out first with the slogan. He did not speak on where the IEA draws its authority from, to be able to referee this game, though.

Said the IEA official: 'Political parties, in the course of campaigning, ought to avoid plagarising the symbols, slogans and colours of other parties or candidates. Clearly, if you look at this provision, one of them may be running afoul of this particular provision, and it is unacceptable. 'So we have to investigate who came out first with which provision of the slogan. Then we will be able to determine clearly that one of them is not complying with a document they themselves contributed extensively in preparing.'

The controversy has drawn in a number of political activists. A senior lecturer in Political Science at the University of Ghana, Seidu Halidu, advises the electorate to look beyond slogans and focus more on political parties' ability to deliver.

This has increased the tempo of accusations hurled at each other between the two leading political parties. The NDC claims that its 'Better Ghana' agenda has released many Ghanaians from the hardships inflicted on the people by eight years of NPP rule, which failed to deliver.

Officials cite the free school uniform policy of the government, thousands of schools allegedly removed from under trees by the provision of first class classrooms, single digit inflation for well over two years, boom in the national economy, creation of jobs, and implementation of the Single Spine Salary Structure, which has boosted workers incomes, as some of the achievements that could be verified on the ground.

The Head of State has wasted no opportunity to crow about the success of his government, describing his achievements as unprecedented in the political evolution of this country.

Critics of the regime, though, insist there is not much to show for the huge borrowing the government of President John Evans Atta Mills has undertaken, and which has saddled this country with debts.

They say that even if there were gains at all, they have been achieved at great cost to the future development of the nation. At the last count, the NDC regime has borrowed as much as US$10 billion, certainly the highest by a single regime in the history of Ghana.

The US$10 billion aside, the government has contracted US$3 billion from China, which is still being awaited.  This will raise the debt profile to US$13 billion and still counting. Yesterday, Finance Minister Dr. Kwabena Duffuor laid a number of loan agreements in Parliament that may push the nation's debt profile further.

So far, there is very little on the ground to show for the huge borrowing. This columnist is of the view that the Mills administration must be stopped from mortgaging the future of this nation to creditors. As it is, this nation is inching slowly back to the stage when the debt stock of the nation may overwhelm the ability to manage.

There is the genuine fear that this administration would lead this country further into the woods. The other day, former President Jerry John Rawlings intimated that the driver had already landed the vehicle of Ghana into the ditch, and that the driver is not worth handling the vehicle, even if the people manage to salvage the vehicle from the pit.

Against the NDC record in government is the achievement of the NPP in eight years of administering this country, during which the Kufuor government took the country into the Highly Indebted Poor Country (HIPC) initiative and redeemed the nation within two years, certainly unprecedented in the HIPC initiative world-wide.

The successful implementation of the HIPC initiative qualified this nation for debt relief, which went a long way in helping to build on the infrastructure of this society. The completion of the Accra-Yamoransa-Road, the re-construction of the Accra-Kumasi Highway, the Tetteh Quarshie Interchange and the Accra-Aburi Highway, represented a modest return on our investment in the NPP as the governing party.

Several social interventionist policies aided the poor in more ways than one. The introduction of the National Health Insurance Scheme (NHIS) under which the poor could make moderate investments as low as GH¢7.20 in return for medical bills for a whole year enjoyed popular acclaim. For the first time since the Nkrumah regime was overthrown in 1966, pregnant women were delivered at hospitals and other health centres across the country free of charge.

The introduction of free meals for school kids was an innovation. The policy helped to increase enrolment in schools that enjoyed the policy. It was, however, limited.

Many Ghanaians hoped that the successor regime would expand and improve on it, but evidence on the ground does not support the notion that the programme has benefitted from any expansionist idea.

At the moment, the question of judgment debts is threatening to destabilise the nation, as resources of state are ploughed into paying for debts many of which have ballooned beyond the original contract sum. Yesterday, The Chronicle carried on its front page one such transaction in which the state paid Rockshell International a sum of US$40 million for a debt of ¢555,056,000 (GH¢55,305.60).

This nation is not sitting pretty at all. The fact that the Mills administration has not been able to fix the small portions of the Accra-Kumasi Road and other road networks bequeathed to it in three and a half years, tell much about how successful or otherwise the administration has been. I am not surprised that the NDC and its administration are running away from the 'Better Ghana,' on which they rode to power in the 2008 elections. Better Ghana joined its ancestors long ago.