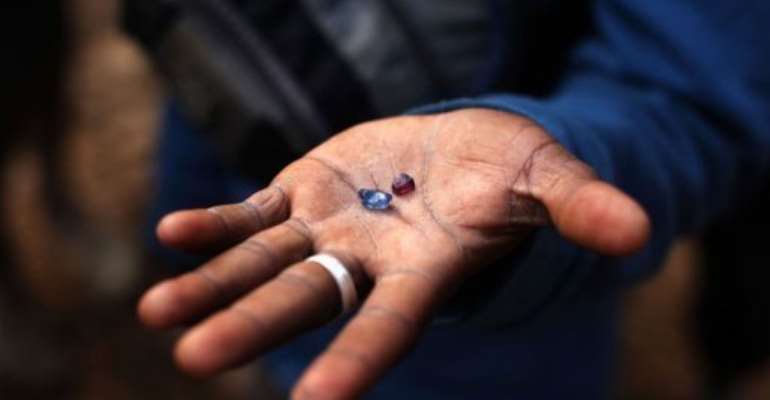 Before sapphires were found in April, Madagascar's newest national park was created to protect the island's famed lemurs. By Andreea Campeanu (AFP/File)

ANTANIFOTSY, Madagascar (AFP) - Knee-deep in muddy water, a 10-year-old child and a woman with braided hair lean over a large sieve, washing earth and rocks, their eyes clenched against the filthy splashing water.

They are among the thousands of panners hoping to strike it rich on a recently discovered seam of sapphires, running through Madagascar's newest national park created to protect the island's famed lemurs and dozens of other rare species.

The 381,000 hectares (941,000 acres) of virgin rainforest of the Ankeniheny-Zahamena corridor officially became a protected area late last year. Then in April, sapphires were found.

"We had an invasion of illegal miners in this park, which is our most recent protected area", says Angelo Francois Randriambeloson from the ministry of environment.

The park has 2,043 identified species of plants; 85 percent are found no where else in the world. There's also 15 species of lemurs, 30 other mammals, 89 types of birds and 129 kinds of amphibians. And that's just what's been discovered so far.

But now among the park's tall trees, a one-kilometre (half-mile) stretch of river valley has turned into a mudpit as thousands of Madagascar's desperately poor people have thrown up makeshift homes of branches and plastic sheets, beaten by near-daily rains.

The vast Indian Ocean island is one of the poorest countries in the world, with 81 percent of the population living on less than $1.25 a day, according to the World Bank.

Sapphires present an irresistible lure of quick riches for the lucky, who say they don't have to dig more than three metres (10 feet) to find large stones.

Madagascar is one of the world's biggest sapphire producers, selling most to Sri Lanka and Thailand for cutting and polishing.

Reaching the mine takes two days of hard walking from the small town of Didy, the closest place reachable by bush taxi. Even getting to Didi is tough. It's 300 kilometres from the capital, and less than a third of the distance is on paved roads.

The last 10 hours of the walk is through beautiful rain forest, climbing precipitous hills on barely perceptive boggy paths.

Morris, a 40-year-old aspiring miner, walked barefoot, carrying a heavy sack of rice so he would have food at the mine.

Most people spend just a few weeks here until they find one or more larger sapphires or rubies, some up to 10 grams.

"Here there are only two: blue sapphires and rubies. But there are more large ones," said Dudu, a 35-year-old buyer.

But the government wants miners to leave the park.

"We are now forming a commission and we are trying to plan a way to send the people away from the mine," said Randriambeloson. "As it's a protected park, its soil also belongs to the Malagasy state."

But people still go every day, in groups, to and from the mine. Some have nothing but the clothes they are wearing. Others carry bags of rice, noodles, powdered milk or even generators.

Water for washing is now hard to find, since the river is extremely dirty. There is no drinking water and not a lot of food. Informal eateries surrounded by mud and fallen branches are expensive.

"The place has changed, there are more people around. But there are no security problems, only sanitation ones," Didy's deputy mayor said.

The authorities in the capital Antananarivo sent in police to discourage people from mining, to little result so far.

"Once the miners are out, we will restore the damage done," Randriambeloson vowed.