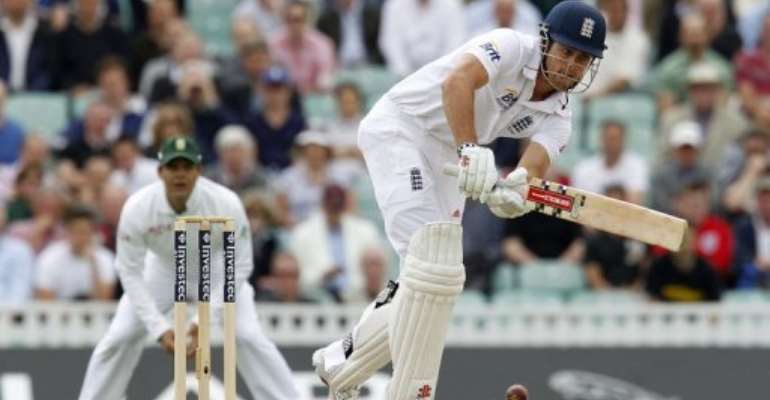 LONDON (AFP) - Alastair Cook and Jonathan Trott steered England into a strong position after the early loss of captain Andrew Strauss on the opening day of the first Test match against South Africa at the Oval on Thursday.

With Cook on 69 not out and Trott on 68, England had reached 158 for one at tea as they made a strong start to their bid to retain their place on top of the Test world rankings.

The pair came together without a run on the board after Strauss was leg before wicket to Morne Morkel off the fourth ball of the match.

But Cook and Trott were largely untroubled on an easy-paced pitch as they rebuilt the England innings with sensible batting, only playing the ball when it was necessary or when they could pick off loose deliveries.

South Africa's highly-rated pace attack was neutralised as a result and the tourists, who are seeking to overtake England as the number one ranked Test team, used spin bowlers for 12 of the 53 overs sent down before tea, including two by part-time off-spinner JP Duminy.

Strauss's dismissal justified South Africa's decision to give the new ball to Morkel instead of Dale Steyn. It was the seventh time in nine matches that Strauss had fallen to the tall fast bowler.

With Morkel bowling around the wicket to the left-hander, Strauss was trapped on the crease by a ball angled in to him.

Umpire Steve Davis turned down an appeal by the South Africans, who called for a review which showed the ball was hitting the inside of the leg stump.

Rain delayed the start by 15 minutes and the floodlights were turned on 25 minutes after the start as heavy cloud rolled in. But the weather cleared and the afternoon session was played in sunlight.

Cook reached his fifty off 98 balls with seven fours and a top-edged six against Dale Steyn, while Trott took 127 deliveries to reach the mark, hitting six fours.