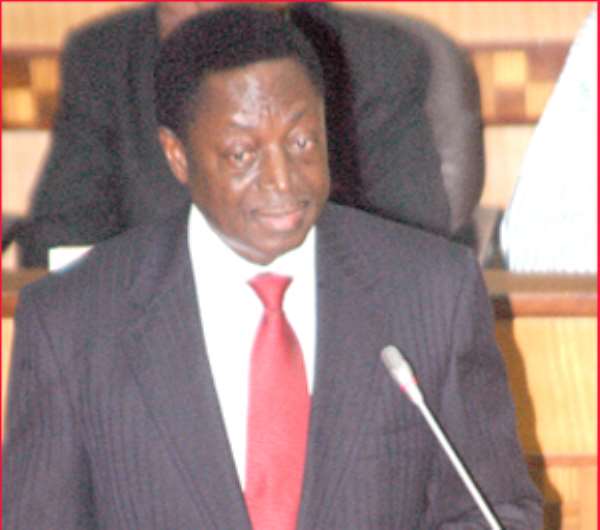 Despite about GH¢15,565.5 million approved by Parliament last November in the 2012 Budget, the government is demanding more money to support its spending for the rest of the year.

'An analysis of developments in both the domestic and global environment since the beginning of this year has necessitated some revision in the assumptions which underlined the 2012 Budget and economic policy,' said the Finance Minister.

Dr. Duffour said the developments had necessitated additional revenues as well as expenditure.

The amount is expected to go into the payment of wages of government workers, subsidizing fuel and utility and election related expenditures.

The increase in government's recurrent expenditure, he pointed, was as a result of the 18 per cent salary adjustment for 2012 and payment of deferred salary liabilities arising from the implementation of the single spine pay policy.

Apart from covering fuel subsidies arising from the unstable crude oil prices and utility subsidies due to the non-adjustment of utility prices, the cedi would have to be cushioned from its recent depreciation.

'The recent depreciation of the domestic currency has corresponding led to an increase in the debt servicing,' he stated and added that accordingly, interest payment on domestic debt for the remaining period of the year had increased by GH¢296.0 million and external debt by GH¢11.45 million.

'Provisions for these cost increases have therefore been made in this supplementary budget.'

On the election related expenditure, the Minister said money would be needed for the procurement of verification equipment, as the nation is 'barely five months to the 2012 presidential and parliamentary elections.'

He said because of the revised revenue and expenditure estimate, the 2012 budget will result in a cash deficit of GH¢54,669.0 million, an equivalent of 6.7 per cent of the gross Domestic Product (GDP) compared to the main 2012 budget estimate of GH¢3,369 which was 4.8 per cent of GDP.

'The total amount required to finance the revised budget deficit is GH¢1,300.16 million of which foreign financing is estimated at GH¢205.50 million and domestic financing at GH¢1,094.66 million.'

The minister said GH¢1,095.8 million, out of the amount required for government's spending for 2012, would be used to deal with floats and commitments from the previous year.

He said the government had put in place measures to support expenditure monitor and control to ensure the avoidance of excess spending 'especially with the elections coming up later in the year.'

To ensure strict compliance to government directive on spending by the various Ministries, Department and Agencies (MDAs), he said an expenditure monitoring team had been set up 'to ensure no slip page occurs.'