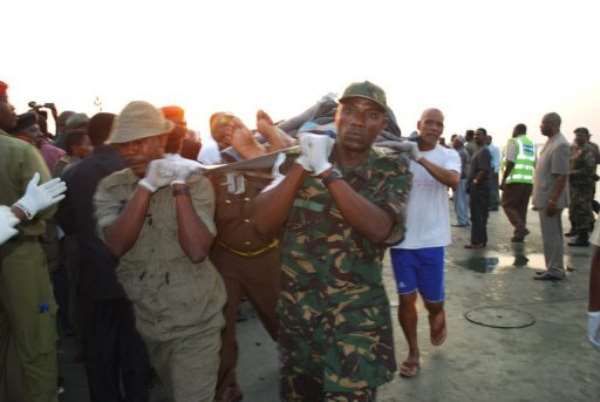 ZANZIBAR, Tanzania (AFP) - An official said Thursday there was no hope for more than a hundred people still missing a day after a ferry sank off the Indian Ocean island of Zanzibar, with 38 bodies already recovered.

The vessel, which was officially carrying at least 290 passengers and crew, including more than 30 children, went down in choppy waters off Zanzibar after leaving Tanzania's commercial capital Dar es Salaam around midday Wednesday.

"Search operations continue but it is now almost impossible survivors will be found...," he told reporters.

"The ship has completely sunk. There were 290 people on board," said Mhina.

"We pray that those injured have a speedy recovery," he added.

It was the second such tragedy in less than a year: last September, more than 200 people died when a ferry sank.

Mhina said that the conditions had hampered rescue operations, forcing a halt overnight.

"The weather was very bad, there were big waves and strong wind," he added.

On Wednesday, weeping relatives gathered on the quaysides in both Dar es Salaam and Zanzibar, where survivors emerged soaking wet from rescue boats. Foreign tourists were seen wrapped in blankets.

The archipelago is famed both for its white-sand beach resorts and for Stone Town, the old quarter of Zanzibar, which is a UNESCO heritage site and popular tourist destination.

Officials said the ferry had been carrying 251 adults, 31 children and nine crew, according to the passenger list. At least 16 foreign tourists were on board, 14 of whom had been rescued.

But ferries in the region very often carry additional passengers who do not feature on the official manifest.

More than 200 people perished in September when the ferry Spice Islander capsized as it sailed between two of the three main islands that make up Zanzibar, a semi-autonomous part of Tanzania.

That was one of the worst maritime disasters in Africa in the past decade.

The September disaster is believed to have been caused by overloading, with some angry survivors accusing port and ferry officials of having ignored the protests of passengers that the boat was overcrowded. Over 600 people survived.

The boat had initially been reported by officials to be named MV Kalama, but officials said Thursday the stricken vesel was in fact her sister ship, MV Skagit.

According to a statement from Tanzania's Surface and Marine Transport Regulatory Authority (SUMATRA) the boat left Dar es Salaam around midday and had issued an alert signal after reaching waters off Chumbe Island.

However, an employee at the eco-lodge on Chumbe said the vessel appeared to have capsized off another small island close by, and that rescue teams had sailed past Chumbe.

The Washington State Department of Transportation said it had sold the MV Skagit and the Kalama in 2011 to a Canadian company which operates routes between the African continent and Zanzibar.

2020 Election Petition was about EC Chair’s declaration; not...
3 minutes ago