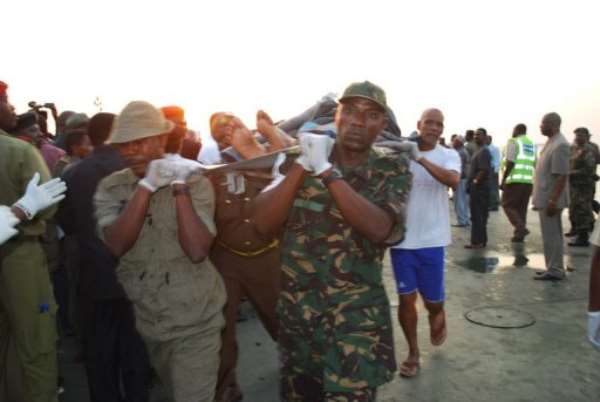 ZANZIBAR, Tanzania (AFP) - At least 31 people have drowned and more than a hundred more are missing feared dead after a ferry sank off Zanzibar, police said Thursday, a day after the accident.

The vessel, which was officially carrying almost 290 passengers and crew, including more than 30 children, went down in choppy waters off Zanzibar after leaving Tanzania's commercial capital Dar es Salaam around midday Wednesday.

It was the second such tragedy in less than a year.

"Search operations continue but it is now almost impossible survivors will be found...The ship has completely sunk. There were 290 people on board," said Mhina.

"The weather was very bad, there were big waves and strong wind," which had hampered rescue operations and forced a halt overnight, he added.

Tanzania's police chief arrived in Zanzibar to coordinate operations and launch an investigation.

On Wednesday, weeping relatives gathered on the quaysides in both Dar es Salaam and Zanzibar, where survivors emerged soaking wet from rescue boats. Foreign tourists were seen wrapped in blankets.

The archipelago is famed both for its white-sand beach resorts and for Stone Town, the old quarter of Zanzibar, which is a UNESCO heritage site and popular tourist destination.

Saidi Shabaani, an official in Zanzibar's vice president's office, said the ferry had been carrying 251 adults, 31 children and six crew, according to the passenger list. The number of foreigners on board was not yet known.

But ferries in the region very often carry additional passengers who do not feature on the official manifest.

More than 200 people perished in September when the ferry Spice Islander capsized as it sailed between two of the three main islands that make up Zanzibar, a semi-autonomous part of Tanzania.

That was one of the worst maritime disasters in Africa in the past decade.