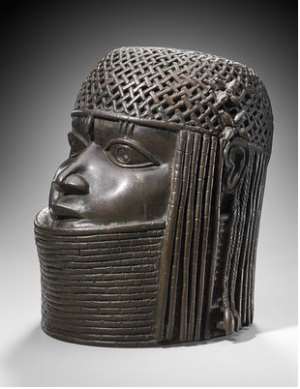 “The exhibition is showcasing some of the works that made Benin (Nigeria) famous. It once again, reminds the world of a civilization truncated by the imperial forces of the colonialist. The works on show at this exhibition are some of the 3000 odd pieces of bronze and ivory works forcibly removed from my great grandfather's palace by some Britons who invaded Benin in 1897. The British kept some of the loot for themselves and sold the rest to European and American buyers. These works now adorn public museums and private collector's galleries, all over the world.”(1) As had been anticipated by many, the National Commission on Museums and Monuments, NCMM, the Nigerian authority responsible for the preservation and conservation of Nigeria's cultural heritage has reacted to the donation by Robert Owen Lehman of 32 looted Benin artefacts to the Boston Museum of Fine Arts.

Members of the notorious British Punitive Expedition of 1897 against Benin, posing proudly with looted Benin ivories and bronze objects.

In a statement distributed to the press, (2) Yusuf Abdallah Usman, the Director- General of the National Commission for Museums and Monuments, declared, “We have read with trepidation the donation of thirty-two works of Benin Art, precisely 28 Bronze and six Ivories looted during the Benin Massacre of 1897…” The Director-General added that these works that are part of the heirloom of the Benin kingdom and Nigeria generally were taken out illegally:

“They form part of the history of the people. The gap created by this senseless exploitation is causing our people, untold anguish, discomfort and disillusionment”.

The Director-General took strong objection to the view attributed to a curator of the Museum of Fine Arts, Boston, that the donation met all legal standards (3) and expressed Nigeria's rejection of such a position:

“We are vehemently opposed to this stance by the management of the Museum of Fine Arts. Objects taken illegally should be returned to their rightful owners and in this case the people of Nigeria. No one can give objective and true history of their patrimony however much they tried than the true owners.”

Thus Nigeria rejects the claim that the looting of the Benin artefacts by the so-called Punitive Expedition was legal. Title to those artefacts therefore did not pass to the looters. The implications of this rejection will be discussed later. The rejection of the arrogant pretension of Western curators to tell the history of those who have been deprived of their artefacts should serve as antidote to the self-importance and paternalism of some Western scholars.

What incensed most the Director-General of the NCMM was the assertion that there has been no official request for the return of the Benin artefacts, an echo of the standard Western defence anytime the issue of restitution is raised. (4) The Nigerian answer was clear:

“For the avoidance of doubt we hereby place it on record that we demand, as we have always done, the return of these looted works and all stolen, removed or looted artefacts from Nigeria under whatever guise.

We wish to also call on the management of the Museum of Fine Arts, Boston, US, to as a matter of self-respect return the 32 works to Nigeria, the rightful owners forthwith.”

The language of the Director-General is clear and unmistakable: Nigeria wants artworks looted, stolen or removed from the country to be returned. But would the Western Museums, curators and critics understand this? Will they continue saying there has been no demand for the return of these artefacts? Will they continue to argue that the request was not formal or was not specifically addressed to them? We should not underestimate the imaginative power to invent excuses and defences when it comes to the restitution by the West of looted African artefacts.

We suggest to the Director-General that a copy of the statement, with the letter head of the NCMM, should be sent to the Board of Trustees and the Director of the Museum of Fine Arts, Boston, at their address. A copy of the message should be sent by registered mail and another copy sent through the Nigerian Embassy in Washington, DC. Copies of this letter should be sent also to UNESCO, United Nations and ICOM as well as to the media. This should prevent anybody from saying later that they are not aware of the existence of any such statement.

We read the statement of the Director-General to refer mainly to artefacts illegally removed from the country. Thus for example, genuine gifts made by traditional rulers to other foreign dignitaries and personalities are not under discussion. But what about the hasty gift made by General Gowan to the British Queen Elizabeth, in contravention of Nigerian laws?

What about those who do not hold their supposed rights directly from the nefarious punitive expedition and may have bought the artefacts from dealers? Could they plead good faith? Those who bought the Benin bronzes in 1897 and immediately thereafter, such as the Germans and Austrians, can surely not advance any arguments based on good faith. Everybody knew then that the artefacts that had arrived from Nigeria were from the bloody invasion of the Kingdom of Benin. Does this also fully apply to later purchasers? Dealers and auction houses are usually very proud to inform potential purchasers that their Benin objects came from the invasion of 1897. Can anyone therefore argue honestly that they were not aware of the illegality and illegitimacy attached to the objects they were about to purchase? Similarly, those who acquired looted Nok, artefacts can hardly pretend not to have known that they were buying looted goods after Nok artefacts had been put on the ICOM Red List as objects so important for history that they should under no circumstances leave Nigeria. In this connection, the issue of the looted NOK sculptures the French Government knowingly bought and was later authorized post facto by the Nigerian Government to keep through a dubious agreement will have to be reviewed. A leading Nigerian legal scholar, Prof. Folarin Shyllon has rightly described the agreement as an “unrighteous conclusion.” (5)

Above all copies of the agreement should be made available to the public. Moreover, we should be informed about the benefit Nigeria gained from this singular agreement. More important is the non-observance or disregard of Nigerian law by the Nigerian authorities in so far as they may be seen as condoning the violation of Nigerian law by France. It hardly needs to be stated that a government that does not observe its own laws will find it difficult to convince its citizens and others to obey the law. The issues involved in recovering Nigerian artefacts abroad are manifold and should be carefully managed. What then is to be done?

1. The National Commission on Museums and Monuments should set up a Restitution Committee consisting of lawyers, art historians, art critics and representatives of traditional authorities. This body shall define the issues involved and suggest strategies and tactics for dealing with the question of restitution.

The country of T.O.Elias (6) and Rotimi Williams (7) has an abundance of legal talent which should be utilized. The Committee would look into jurisdictional questions such as whether Nigeria is best served by bringing cases in Nigerian courts or abroad where the illegal holders are.

2. The Restitution Committee should also determine whether it would not be more profitable to adopt a method of political negotiation rather than legal dispute settlement.

We are for negotiations but the intransigence of some holders of looted artefacts may make litigation unavoidable. We have suggested that a holder such as the Ethnology Museum of Berlin that holds 580 Benin artefacts could accept a solution that recognizes the ownership of Benin in all the artefacts and attributes 290 artefacts to Berlin on permanent loan and 290 to Benin on the understanding that each side could borrow artefacts from the other for exhibitions.

3. All cooperation agreements with non-Nigerian museums, especially those from countries illegally holding Nigerian artefacts, should be reviewed. In this context, attention should be given to training arrangements made with such museums to determine whether, after 50 years of independence, Nigeria cannot afford its own training programmes and courses for future museum officials. The impression created that training courses are offered in exchange for non-insistence on the return of Nigerian artefacts cannot be dismissed easily.

4. The NCMM should provide a brief account of what efforts have been made since Independence to recover Nigerian artefacts unlawfully held abroad.

5. A website should be established where restitution matters can be discussed and information made available to the public.

6. Nigeria's demand for the return of her looted, stolen or illegally removed artefacts should be brought to the attention of the public in the countries concerned.

7. The NCMM should issue simple brochures that explain Nigeria's position on matters of restitution.

8. It would be useful to have a list of the most wanted restitution objects, with indications of the names of holders and the locations of the Nigerian artworks.

9. Needless to say, Nigeria must coordinate its policies and strategies with African States and others, such as Greece, Italy, Peru and Turkey that are interested in restitution matters. The experience of these countries could be helpful.

The success of Nigeria in recovering her looted, stolen or illegally removed artefacts will largely depend on how she presents the issues and how she is perceived by others as determined to use all necessary means to secure them. Nobody, including the Western holders, disputes that these artefacts are Nigerian and that they were removed under dubious circumstances and through the use of violence and deceit. Statements and declarations are no doubt necessary but they must be followed by concrete actions that indicate a strong will to achieve the stated aim. A great nation cannot afford to appear as merely making strong statements for domestic public consumption.

“It is indeed unfortunate that so much Nok material has been looted over time to supply the international market. Properly excavated, such pieces might have shed valuable light on the Nok culture.”

NOTES
1. Introductory Note to the catalogue of the exhibition Benin Kings

2. Statement on Controversial Donation of Looted Benin Art Annex I

4. Ibid.
5. F. Shyllon. “Negotiations for the Return of Nok Sculptures from Nigeria - An Unrighteous Conclusion,” http://portal.unesco.org

ANNEX I
STATEMENT OF THE NATIONAL COMMISSION ON MONUMENTS AND MUSEUMS

LOCATIONS OF NIGERIAN MASTERPIECES IN USA AND EUROPE